NBA playoffs to resume despite Lakers, Clippers voting to boycott remainder of season in response to Jacob Blake shooting

Although the Los Angeles Lakers and Los Angeles Clippers had both voted to boycott the remainder of the 2019-20 NBA season, that stance appeared to have changed by Thursday morning.
KABC
By Marc Cota-Robles and John Gregory 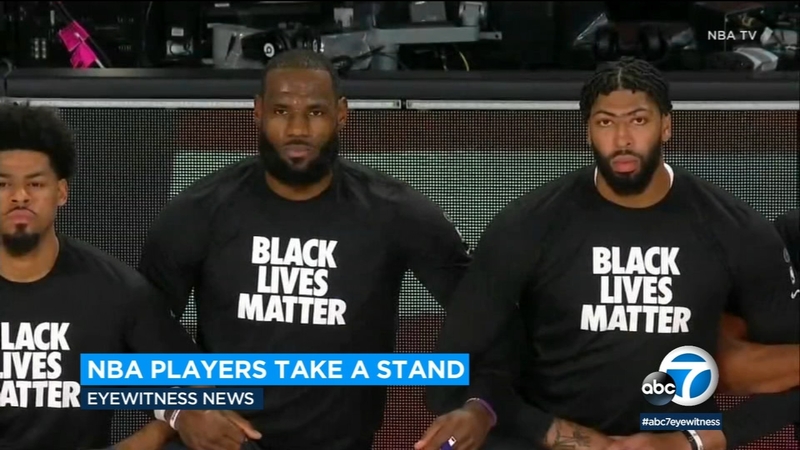 Although the Los Angeles Lakers and Los Angeles Clippers had both voted to boycott the remainder of the 2019-20 NBA season, that stance appeared to have changed by Thursday morning as ESPN reported that players had decided to continue with the playoffs.

Discussions are underway on when teams will resume play. Three playoff games that were scheduled for Thursday, including Game 6 of the Clippers-Dallas Mavericks series, have been postponed.

Wednesday's vote by the L.A. organizations, the only two NBA teams to do so, came in the wake of the officer-involved shooting of Jacob Blake in Kenosha, Wisconsin. Blake, a Black man, was shot in the back seven times by police on Sunday while trying to enter his vehicle. His shooting has sparked nationwide protests over racial injustice and police brutality.

In a players' meeting on Wednesday night, teams were polled about what their preference would be, and the Lakers and Clippers both voted to end the season. But ESPN sources stressed there was no final decision on whether or not to resume the playoffs and the poll was informal.

Lakers star LeBron James has been one of the most-vocal NBA players in calling for a boycott of the season.

"We play a beautiful game, which brings so many great families together and people should be able to rejoice and enjoy it," James said. "But at the same never lose track of what's really going on in our world, especially here in America."

The cancellations among four major sports leagues on Wednesday started with the NBA, when the Milwaukee Bucks decided not to play in Game 5 of their playoff series against the Orlando Magic. Kenosha is located 35 miles south of Milwaukee.

Other teams followed suit and the NBA and the players association announced all three playoff games that had been scheduled for Wednesday would be postponed and rescheduled.

Elle Duncan of ESPN said in a tweet that NBA players have only boycotted a game once before. Duncan said nearly six decades ago, Hall of Famer Bill Russell and several of his Boston Celtic teammates sat out a game in protest of racial injustice.

We’ve only ever seen NBA players boycott a game ONCE. It was an exhibition game in 1961 and Bill Russell with a handful of other Celtics sat out in protest of racial injustice.. the fact we are still doing this 50 years later for the SAME THING should be incredibly telling.

Jeanie Buss, the governor of the Lakers, tweeted her support for the team: "I stand behind our players, today and always. After more than 400 years of cruelty, racism and injustice, we all need to work together to say enough is enough."

"Players have, once again, made it clear - they will not be silent on this issue," National Basketball Players Association Executive Director Michele Roberts said.

Fans in downtown Los Angeles on Thursday morning had mixed feelings about the boycott.

"I think it's a good idea. Because, to me, a statement has to be made somehow," said Donald Fleming.

Others opposed the move.

"We're all against police brutality, we all think it's wrong. That doesn't mean you quit your job over it," said Ron Moskowitz.

Rivers spoke at length about how disturbing it was to watch the video of Blake being shot.

Demanding societal change and ending racial injustice has been a major part of the NBA's restart at Walt Disney World. The phrase "Black Lives Matter" is painted on the arena courts, players are wearing messages urging change on their jerseys and coaches are donning pins demanding racial justice as well.

Many players wrestled for weeks about whether it was even right to play, fearing that a return to games would take attention off the deaths of, among others, Breonna Taylor and George Floyd in recent months.

Taylor, a 26-year-old Black woman, was fatally shot when police officers burst into her Louisville, Kentucky apartment using a no-knock warrant during a narcotics investigation on March 13. The warrant was in connection with a suspect who did not live there and no drugs were found.

Then on May 25, Floyd died after a white Minneapolis police officer pressed a knee into the Black man's neck for nearly eight minutes - all captured on a cell phone video.

Major League Baseball teams that were scheduled to play Wednesday also decided to walk off the field, including the Milwaukee Brewers and Cincinnati Reds as well as the Los Angeles Dodgers and San Francisco Giants.

Dodgers star Mookie Betts, who is Black, told his teammates he was sitting out and they backed him.

"For me, I think no matter what, I wasn't going to play tonight," Betts said. "I have to use my platform to at least get the ball rolling."

Los Angeles Dodgers star Mookie Betts and several San Francisco Giants players kneeled during the national anthem before the opening day game on Thursday as a sign of unity for social justice.

Once Betts made his decision, the Dodgers stood by him, ace Clayton Kershaw said.

"More than anything as a teammate of Mookie's, as a member of this team ... as a white player on this team is how do we show support? What's something tangible that we can do to help our black brothers on this team?" Kershaw said.

A sprinkling of players from the Dodgers and Giants were loosening up and the grounds crew was prepping the field at Oracle Park when the game was postponed.

"My cousin got shot and killed. My father was one of the first black men in his high school," said Dodgers manager Dave Roberts, son of an African American father and Japanese mother. "It was just more of getting everyone together and sharing our thoughts. ... Collectively, ultimately we came to the consensus that we shouldn't play today."

The WNBA also postponed three games that were scheduled for Wednesday. Then Major League Soccer teams began joining in, with the cancellation of a match between the Los Angeles Football Club and Real Salt Lake.