If Lakers win Game 5, here's what fans in LA can, can't do to celebrate

The Lakers could win their 17th championship in franchise history Friday, and although fans may want to celebrate in public, health officials are asking people to celebrate at home due to the pandemic.
KABC 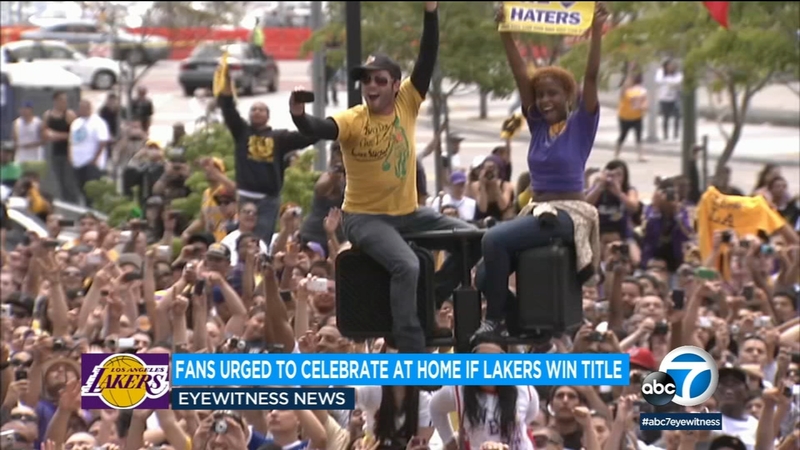 How fans in LA can, can't celebrate if Lakers win

LOS ANGELES (KABC) -- The Lakers could win their 17th championship in franchise history Friday, and although fans may want to celebrate in public, health officials are asking people to celebrate at home due to the pandemic.

L.A. will wear the Kobe Bryant-inspired black jerseys as they take on the Miami Heat in Game 5 of the NBA Finals in Orlando, Florida. The Lakers are 4-0 in the playoffs with those jerseys.

The championship would be the culmination of a unprecedented year in the NBA -- marked by the death of Bryant, the pandemic and heightened calls for social justice.

"This is truly for Kobe Bryant, man. Rest in peace," said Rami "Ramidogg" Askar, who calls himself a Lakers super fan.

The win would be the team's first NBA title in 10 years, marked by a season that was delayed for months due to COVID-19 and ultimately restarted in a bubble at the Walt Disney World Resort.

"Honestly, it would mean a lot, especially in a tumultuous year," said fan Andrew Mendez.

Gabriel Hart, another fan who was wearing a Lakers jersey outside Staples Center on Friday morning, echoed that sentiment: "Nothing brings us better together than sports."

However, despite the excitement, L.A. County officials are concerned that large public gatherings after the game could slow some of the progress the county has made in reducing new COVID-19 cases.

To prevent crowds gathering at Staples Center, L.A. LIVE has been cordoned off and people will not be allowed on the property. Parking is restricted around the area, and the TEAM LA store will not be open.

"Very excited that the Lakers are going to be playing this this next game," said Dr. Muntu Davis, Los Angeles County health officer. "And we just want to remind people, the safest way to celebrate all of our teams, both the Lakers and the Dodgers, is to do it in the comfort of your own home."

Some ways fans can celebrate at home include watching the game with those in your household, holding a virtual watch party or a car parade around your neighborhood -- avoiding loud noises in an effort not to disturb your neighbors.

For those looking to watch the game at a restaurant, there are public health restrictions in place.

Restaurants in the county are only allowed to provide food and drinks outdoors. Wineries and breweries are also allowed to operate with outdoor services, but bars are closed.

For a full list of restrictions in your area, check our map of reopenings by county.

If the Lakers do win, fans and players will likely celebrate without a traditional parade given the risks factors.

"We can celebrate with our families at home and in a way with the players as well on social media," Mendez said.