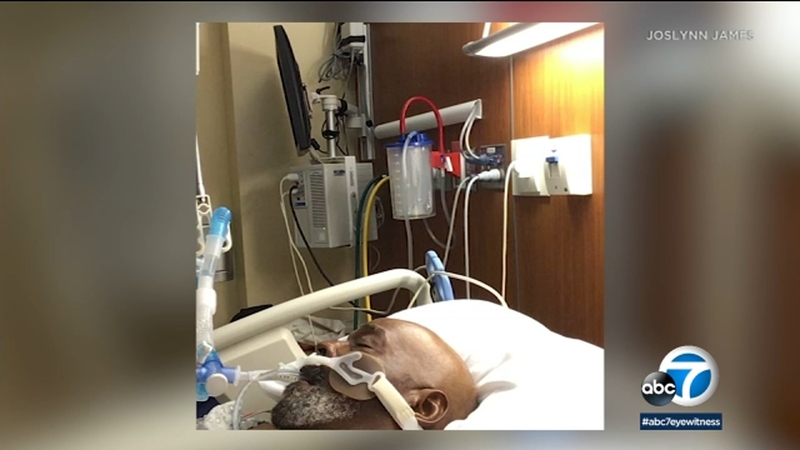 LAKEWOOD, Calif. (KABC) -- The odds were not in 73-year-old Joshua James' favor when he became sick with COVID-19. At one point doctors told his family to begin making funeral arrangements. But they had faith James would defeat the odds.

Family and faith are foundational for James who volunteers at his local church's food giveaway several days a week. But when he started feeling ill, he could no longer serve.

"A bad cold. And then I started aching. Then I couldn't walk," James told Eyewitness News.

He was hospitalized and diagnosed with COVID-19. The prognosis was not good.

"My dad is diabetic, he is hypertensive. He does have high blood pressure he does have an atrial fib," said his daughter Joslynn James.

He describes himself as a fighter.

"That's my first response is to fight," he said.

Family around the country began praying.

James says he only remembers dreaming about loved ones, including his mother, who died in 2014 and would pray for him daily.

"My mother come to me," he said, his voice breaking with emotion. "And she said, 'Boy, I ain't gonna pray for you no more, but I'm going to pray for you this time.' I just knew everything was going to be all right."

The father of six and grandfather is now known as the "miracle man."

"Lakewood Regional Medical Center calls him the miracle man," said Joslynn. "Because he's the only one in his age group that had been admitted during this pandemic that had been on a ventilator and survived."

When he was finally discharged, she worshiped to the hymn "His eye is on the sparrow," as her father was overcome with emotion, and through tears repeated, "Thank you, Lord. Thank you, Lord."

"He was on remdesivir. He was on zinc and he was on convalescent plasma," she said.

They know families who've lost their loved ones to the virus.

More than 6,000 people in Los Angeles County alone have died after becoming ill with COVID-19.

They encourage those in the battle to be fierce advocates.

"Call up there every hour. Talk to the nurses. Develop a relationship with them," she said.

"We really, really believe that the treatments that we did for my dad worked."

A GoFundMe account has been set up for James.

The race to complete the final phase of testing for a COVID-19 vaccine is about to enter the homestretch. Researchers know it's key to ending the pandemic and Southern Californians are stepping up to help scientists gather the needed data.