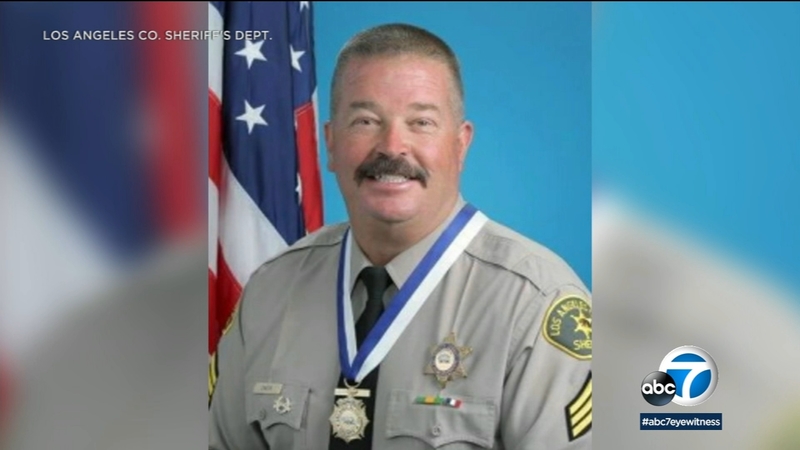 Trenton Trevon Lovell, 31, of Lancaster, is set to be sentenced May 17 to life in prison without the possibility of parole for the execution-style killing of Sgt. Steve Owen, 53, who was shot five times on Oct. 5, 2016, in the 3200 block of West Avenue J-6.

Owen -- a 29-year department veteran who was well-known for his community involvement -- was among those responding to a call of a possible burglary in progress nearby when he broadcast over the police radio that he had the suspect at gunpoint.

Prosecutors had opted not to seek the death penalty against Lovell.

Shortly after being sworn into office last December, Los Angeles County District Attorney George Gascón issued a series of directives, including one that "a sentence of death is never an appropriate resolution in any case."

In a statement issued after Lovell's guilty plea, Gascón said the sergeant had "sacrificed his life to protect the community he served.''

Along with first-degree murder, Lovell pleaded guilty to a series of other crimes the same day as the sergeant's killing. Those included an attempted murder charge for using Owen's patrol car to ram sheriff's Deputy Zachary Anderson's patrol car, along with two counts each of first-degree residential robbery and false imprisonment by violence for fleeing to a nearby home occupied by a 19-year-old woman and her 17-year-old brother, where Lovell holed up for about an hour before fleeing.

He also pleaded guilty to one count each of first-degree residential burglary and possession of a firearm by a felon.

Lovell -- who had two prior convictions from 2006 and 2009 for robbery and was on parole at the time of Owen's slaying -- agreed to waive all appellate rights as a result of the plea agreement. Lovell acknowledged that he understood that he was facing a prison sentence with no foreseeable chance of release.

After the hearing, Deputy District Attorney Michael Blake called it a "fair and appropriate disposition."

"I think that what Trenton Lovell has done is very significant in accepting this negotiated plea," Blake told City News Service.

At a June 2018 hearing in which Lovell was ordered to stand trial, Anderson testified that he heard three to four pops that sounded like gunfire before he arrived at the apartment complex.

"I saw Sergeant Owen laying on his back and a male Black standing over him," the deputy testified before identifying Lovell in court.

The deputy said he yelled at Lovell to "get on the ground" and that Lovell "pointed the gun that he was holding at me."

Anderson said he immediately opened fire and began shooting at the defendant, who got into Owen's patrol car, accelerated toward him and rammed into his patrol car. He said he had to move out of the way because he feared Lovell was "going to attempt to run me over," and that both vehicles were disabled as a result of the crash.

The deputy said he re-loaded his weapon as Lovell fled through the apartment complex.

Anderson said he lost sight of Lovell when the suspect jumped over a fence, so he returned to try to render aid to Owen after another sheriff's unit pulled up nearby.

"He was still breathing. He had a pulse," Anderson said.

"Was he responsive at all?" the prosecutor asked.

"No," said the deputy, who went with the sergeant as he was rushed in an SUV to a hospital.

At that hearing, sheriff's Sgt. Guillermo Morales testified that an emergency medical technician told investigators he heard Lovell say he wished his handcuffs were off so he could kill more deputies.'' Morales said the EMT also told authorities that Lovell, who was taken to a hospital for a gunshot wound to his shoulder, said he was "glad he killed the deputy."

The siblings who were inside the home that Lovell entered told investigators that the suspect "started to break down and cry" and told them he had "killed a cop," according to sheriff's Sgt. Marc Boskovich.

Lovell was arrested after jumping over a wall to a nearby home. During a videotaped interview with investigators later that day, Lovell confessed to fatally shooting Owen after the sergeant told him to "freeze." A portion of the interview was shown during the earlier court hearing.

Lovell -- who described himself as a "two-striker" on parole -- told investigators that he turned around and opened fire after he saw Owen standing outside his patrol car with his gun drawn, and said he wanted to disable Anderson's patrol car so he could flee from the scene afterward, sheriff's Detective Karen Shonka testified at the June 2018 hearing.

Under cross-examination, the detective said Lovell told investigators he did not want the sergeant to die.

"He told you he had remorse?," one of Lovell's attorneys, Monnica Thelen, asked.

"Yes," the detective responded, noting that Lovell cried during points of the interview.

Lovell was arrested that day after jumping over a wall and has remained behind bars since then.

Owen's killing prompted an outpouring of support for his family and remembrances of his unwavering dedication to his job and commitment to the community. Law enforcement officers from as far away as New York and public officials, including then-Gov. Jerry Brown, attended his funeral service.