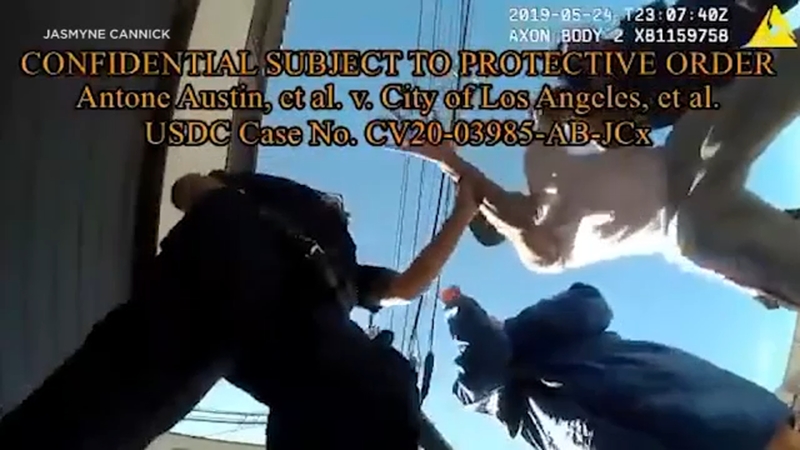 LOS ANGELES (KABC) -- A federal judge has unsealed a Los Angeles Police Department officer's body camera video showing an incident where a Black man who alleges he was racially profiled by officers was arrested in Hollywood.

Antone Austin, 42, claims he was bringing in his trash cans from outside his apartment on May 24, 2019, when two LAPD officers suddenly pulled up and ordered him to turn around.

According to a lawsuit filed against the city of Los Angeles last year, the two officers -- who were responding to a report of a domestic violence incident in which the suspect was the white ex-boyfriend of a neighbor -- immediately and without explanation attempted to handcuff the struggling Austin and became upset with him when he didn't comply.

As Austin was being detained, his girlfriend came running out of the apartment and was also arrested, as seen in the officer's bodycam footage.

Both Austin and the woman were held in jail for several hours, paying a total of $57,000 in bail, according to the lawsuit.

A retired Los Angeles police detective was captured on video hurling racial slurs at a young Black man, prompting the district attorney's office to announce it would review 370 cases he handled.

The 11-minute video, which was made public on Friday by U.S. Magistrate Judge Jacqueline Chooljian as part of the lawsuit, shows the man and woman being physically detained by LAPD officers as the couple repeatedly proclaim Austin's innocence.

The footage begins with the officers unsure that Austin -- a music producer who goes by the name Tone Stackz -- is the person they are looking for.

As the patrol car passes Austin and then turns back, one officer asks, "This dude?'' and his partner responds, "Probably.''

Jasmyne Cannick, a spokeswoman for the couple, said Austin was initially charged with resisting arrest and assault on a police officer, but the assault charge was eventually dropped.

His 30-year-old girlfriend, Michelle Michlewicz, was charged with interfering in the arrest, a charge carrying a prison sentence of up to four years.

The status of the charges was not immediately available Wednesday. An LAPD spokesman said that in accordance with policy, the department would not comment due to the pending litigation.

In court documents, the Los Angeles City Attorney's Office argues that the couple's claim is without merit and should be dismissed, and that Austin and his girlfriend are to blame for the incident. Attorneys for the city also contend that the two LAPD officers are immune from liability.

The lawsuit is set for jury trial in October in downtown Los Angeles.

The couple's attorney, Faisal Gill, said the officers didn't know who they were looking for when they arrived at the scene in response to a domestic disturbance call.

"It was racial profiling,'' Gill alleged. "No question about it and to add injury to insult they arrest my clients, put them in jail ... Even the woman who called 911 tried to tell the officers that they had the wrong person.''