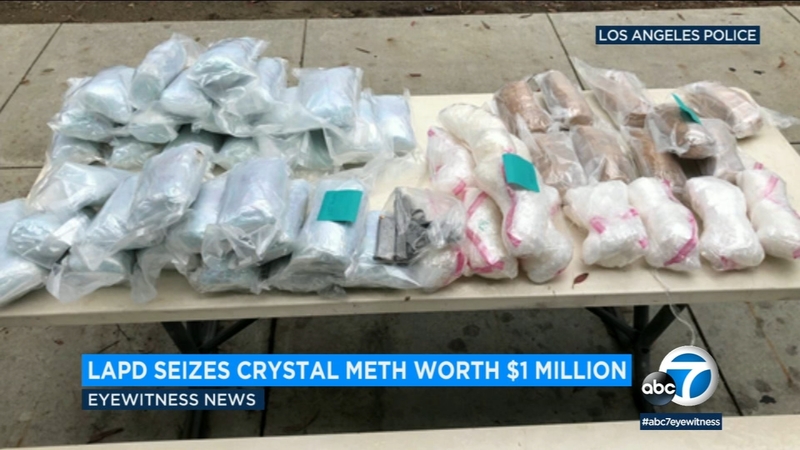 LAPD: Children left in motel room with $1M in meth

SOUTH LOS ANGELES (KABC) -- New details are out about a large meth bust in South Los Angeles with indications that children of a trafficking suspect were left alone in a motel room where more than 100 pounds of the drug were being stored, police say.

Two men were arrested Sunday at the motel on the 7400 block of South San Pedro Street and methamphetamine worth about $1 million was seized.

The investigation began with authorities looking into reports of drug activity in the area when they saw a man get into a vehicle at the motel armed with a handgun.

Officers detained the man and went to speak with the motel manager, when they learned there were two children, ages 8 and 10, left alone in the room.

Police went inside the room and found the children alone and then discovered duffle bags containing more than 100 pounds of methamphetamine.

Hector Carrillo, 31, is the father of the children and was arrested for possession of meth for sales and child endangerment.

Cristian Martinez, 25, was arrested for being a felon in possession of a firearm.

The children were unharmed and placed in the custody of the Department of Children and Family Services.

Investigators believe the two men are part of a larger drug-distribution ring operating in the Los Angeles area.

Southwest narcotics officers surprised drug traffickers when they interrupted the transportation of over 100lbs of Crystal Meth with a street value of approximately $1Million dollars, earmarked for our streets. Two suspects arrested and a loaded firearm was recovered.@LAPDHQ pic.twitter.com/Q3GORkNs7l