Capt. Emada Tingirides is set to become a deputy chief, and take charge of the LAPD's new bureau focused on community safety.
KABC
By Phillip Palmer 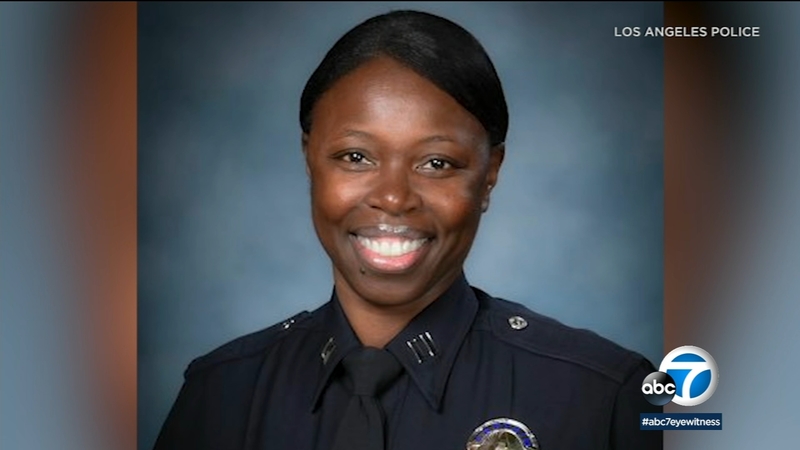 LOS ANGELES (KABC) -- The Los Angeles Police Department is made up of almost 10,000 officers, but proponents of the Community Safety Program believe the 100 officers currently serving nine L.A. neighborhoods can change the culture of the department.

CSP will have its own bureau within LAPD on Aug. 2nd led by soon-to-be Deputy Chief Emada Tingirides, a Watts native who was one of the program's first officers.

Chief Michel Moore believes she is the perfect choice.

"One of the most important decisions and most critical decisions for the future of LAPD was choosing this woman to step into this role. She has been the face of the Community Safety Partnership since it began nearly 11 years ago," Moore says.

CSP officers have spent years trying to build relationships in some of L.A.'s most violent communities, from Girl Scout troops to youth football teams.

The woman who will lead the new bureau says success won't be measured by arrest numbers or crime stats, but trust.

"It's law enforcement working alongside the community, alongside our non-profit organizations and partners to address the concerns," Tingirides says.

The officers already a part of CSP will be transferred to the new bureau in early September with the initial plan to solidify existing elements that are believed to be working.

"The relationship building and the programming is really what's needed and needs to be deepened at this time considering the narrative of what's going on across our country," Tingirides says.

The Los Angeles City Council approved a $150 million cut to the LAPD'sa budget for the next fiscal year, a move that followed activists' mounting calls to "defund the police."

But the timing of this new bureau is being called tone-deaf to those calling for the defunding of police, who say the expansion of CSP is exactly the opposite of what they have been calling for with nationwide protests.

"In addition, this is more of making police do every job... as they're talking about things like tutoring and field trips and rec programs, I'd much rather have a youth worker and an educator and a preventionist and interventionist doing that work, especially as the mom of three kids," says Melina Abdullah, co-founder of Black Lives Matter Los Angeles.

Those sentiments are not lost on Capt. Tingirides, who looks forward to working with the very people who are skeptical of this new policing effort.

"My excitement comes from them expressing themselves because I want to sit at the table with these entities and with these organizations to figure out the 'why' and then come up with the solution so that we can work together and achieve what everybody wants," said Tingirides.
Report a correction or typo
Related topics:
los angeles countylapderic garcettipolice
Copyright © 2022 KABC Television, LLC. All rights reserved.
TOP STORIES
TX school shooting leaves at least 19 children, 2 adults dead
Uvalde school shooting: What we know about 19 kids, 2 teachers killed
Watch Steve Kerr's raw, emotional plea after Texas shooting
CA water board adopts ban on watering some green spaces amid drought
Matthew McConaughey: 'We must do better' after massacre in hometown
Biden to sign policing order on anniversary of Floyd's death
Texas school shooter bought 2 rifles within days of turning 18
Show More
'Lunchflation' is real: Returning to the office is costing a fortune
California moves toward allowing lawsuits over illegal guns
Suspect wounded after CHP, deputies are fired upon in East LA
Mater Dei HS celebrates 3 Heisman Trophy winners amid controversy
More water restrictions expected this summer
More TOP STORIES News