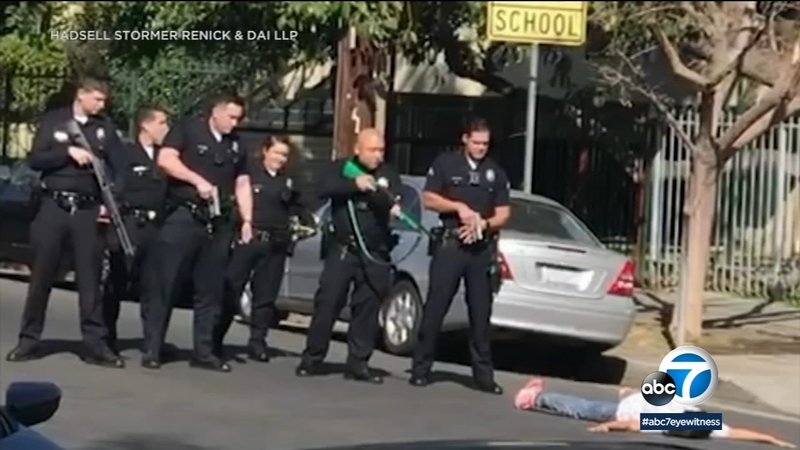 LOS ANGELES (KABC) -- Two women are suing the Los Angeles Police Department over a frightening encounter with officers who pulled them over because they mistakenly believed the women were driving a stolen U-Haul.

Bystander video from a February 2020 arrest shows the young women face down on the pavement. Eleven LAPD officers believed the women stole the U-Haul truck and arrested them with guns drawn in the middle of the street.

"I thought I was going to get shot," said Shibani Balsaver, the driver of the U-Haul.

But Balsaver and Sheilanee Sen say on that day they were actually moving and had rented the U-Haul for that purpose.

They say the truck had been stolen, already recovered and rented out repeatedly before they rented it.

A federal judge has unsealed a Los Angeles Police Department officer's body camera video showing an incident where a Black man who alleges he was racially profiled by officers was arrested.

"They handcuffed us by putting their knees on our backs and on Shibani's neck," said Sen.

"It wasn't until I had said that I had the rental receipt of the U-Haul in the truck, and that's when they looked for it and started calling their supervisors," Balsaver said.

"And once they realized they had made a mistake, they let us go," Sen said.

The two women are represented by a civil rights law firm, and are suing the LAPD and its officers.

They say the officers used "illegal and violent high risk tactics" during a routine traffic stop - a traffic stop they say shouldn't have happened because the previously stolen U-Haul had long since been recovered.

"There were officers there who were making jokes and laughing and not at all sensitive to the fact that I thought that I was going to die a few minutes earlier," Balsaver said.

Eyewitness News reached out to the LAPD for comment on the lawsuit, but has not yet heard back.

The women hope the lawsuit initiates change and more training for officers so it doesn't happen again.

"The last thing we would want is for anyone else to have to go through this, for anyone else to be subjected to this, and God forbid, for something worse to happen," Sen said.
Report a correction or typo
Related topics:
los angeles countylos angelesarrestlapdlawsuit
Copyright © 2022 KABC Television, LLC. All rights reserved.
TOP STORIES
Shooting on 5 Freeway in Sylmar leaves driver wounded
Man who sparked probe into Kobe Bryant crash photos speaks out
Hollywood neighborhood flooded after water main break
15-month-old is youngest person in LA County to die of COVID
Statue honors Kobe Bryant, daughter Gianna at Calabasas crash site
Kaiser to be sued after mom of 3 denied COVID shot dies, lawyer says
Biden stands by pledge to nominate Black woman to Supreme Court: Psaki
Show More
LA City Councilman Mike Bonin says he won't seek reelection
Cardi B wins $1.25M in defamation lawsuit against YouTuber
What to know about the judge viewed as Biden's top Supreme Court pick
Amy Schneider's historic 'Jeopardy!' run comes to an end
Santa Ana mail carrier surprises boy with cancer with his own truck
More TOP STORIES News