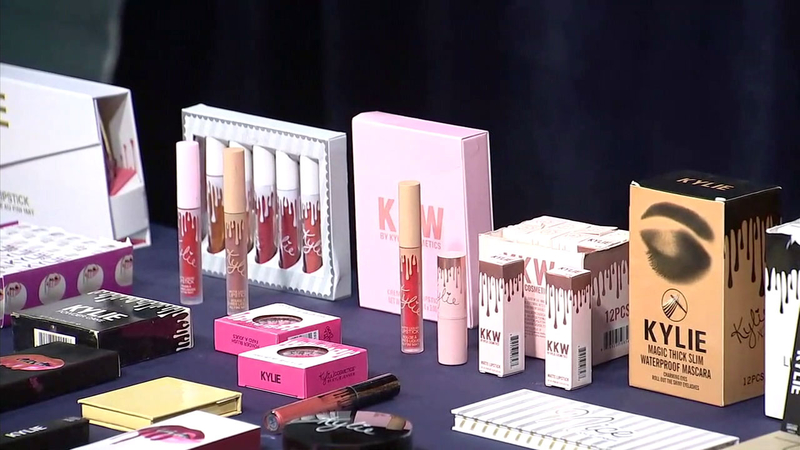 DOWNTOWN LOS ANGELES (KABC) -- Los Angeles police warned about the dangers of using counterfeit cosmetics and urged the public to use common sense when purchasing on the street.

At a press conference on Monday, authorities showcased what looked like high-end makeup but was really $700,000 worth of counterfeit cosmetics containing bacteria and feces confiscated from 21 locations in downtown's Fashion District.

The raid was coordinated by the LAPD's piracy unit. They were tipped off by numerous complaints from people duped into buying the fake makeup.
EMBED More News Videos

A LAPD seized $700,000 worth of counterfeit cosmetics after raiding 21 locations in downtown's Fashion District, a police spokesman said.

"The dangers of counterfeit goods goes well beyond mere financial harm and theft. Many of those goods are not properly screened, tested or regulated, which in turn can jeopardize the safety of our citizens," said LAPD Capt. Marc Reina.

"The content of those cosmetics is not what people think it is. When it's tested, they find high levels of bacteria, lead and in some cases animal feces," Reina added.

The products look almost identical to high-quality eyeshadow, lipstick, and mascara but, authorities say, their prices should have raised eyebrows.

Reina said one of the easiest ways to identify fake products is to ask, 'Where did you buy it?' and 'How much did it cost?'

"When they use the product, they break out in skin rashes, irritations, things of that nature, so complaints go to the brand owners, which then are reported to the LAPD/FBI task force," Reina said.

Out of the 21 businesses raided and cited, six of the owners were arrested while the rest received cease-and-desist orders.