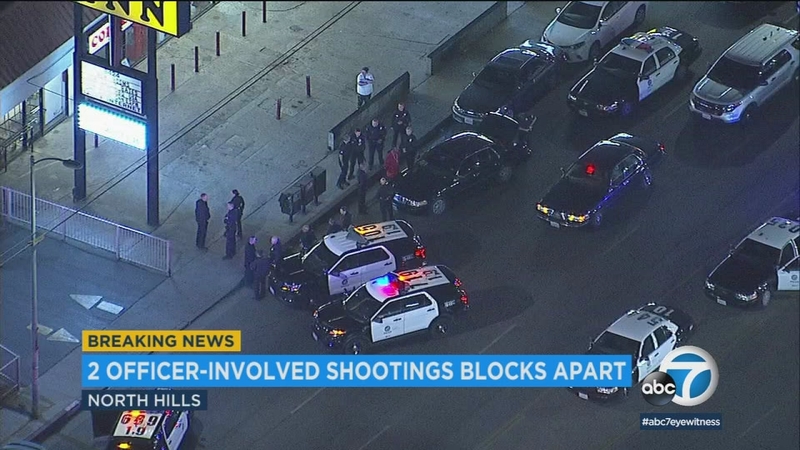 NORTH HILLS, LOS ANGELES (KABC) -- A Los Angeles Police Department officer was struck in the head with an object and a suspect was wounded in the stomach in the second of two officer-involved shootings overnight Tuesday in North Hills, authorities said.

The latter incident happened about 1 a.m. in the area of Nordhoff Avenue and Orion Street, where a man got into an altercation with two off-duty officers and hit one of them, possibly with a bat, according to the LAPD.

After the officers requested help, one of them and the suspect were transported to a hospital, where they were listed in stable condition, police said. The suspect underwent surgery; the injured officer was later released from the medical center.

It was unclear what prompted the confrontation.

Earlier, about 11:15 p.m., police received a report of about 20 gunshots near the Palm Tree Inn in the 8400 block of Sepulveda Boulevard, investigators said. Officers who were already in the area responded to the scene and confronted a man armed with a rifle.

Police shot at the suspect but he was not struck by gunfire, the LAPD said. The suspect put down the rifle and was taken into custody.