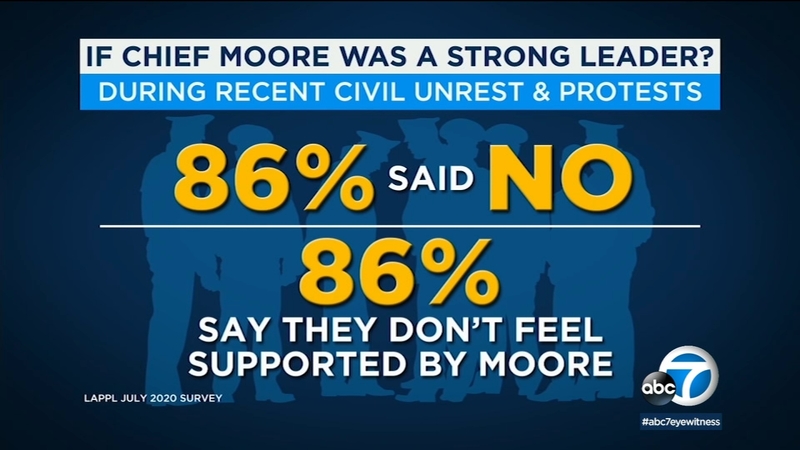 The survey, published in this week's edition of the Los Angeles Police Protective League's newsletter Thin Blue Line, asked officers if they "feel Chief Moore provided strong leadership during the recent civil unrest/protests,'' to which 86% of participating officers responded no, according to the survey's results.

Nearly 70% of respondents said they did not feel the department was prepared for the protests.

"The majority of respondents felt Chief Moore did not exhibit strong leadership and called him a politician' for supporting protesters,'' according to the survey.

The survey found that 86.33% of officers do not "feel supported'' by Moore, with a majority of responders saying they lost respect for Moore when he kneeled and "more than one respondent stated that due to the lack of support, they were considering retiring early and/or leaving for a different agency.''

Nearly 90% of participating officers also showed widespread discontent of LAPD command staff during the protests, and a majority stated they believed command staff who kneeled with Black Lives Matter protesters were "weak/cowardly.''

The survey shows that "many participants'' want Moore to resign for various reasons, such as kneeling with protesters, not defending officers to the news media, allowing some who were arrested during demonstrations to go "without consequence,'' and "pandering'' to politicians and activist groups.

Over 90% of respondents said they would retire now if they could, and the majority said they "do not feel supported enough to want to stay.'' However, 60% of responding officers said they were not planning on leaving the LAPD for another agency.

Those who responded that they were planning to leave the department said they were thinking of going to law enforcement agencies in Santa Ana, El Segundo, Whittier and Anaheim. Other possible options were Idaho and Texas, as well as federal agencies -- or leaving law enforcement all together.

Officers were also asked to rate morale on the force, with one being the lowest and 10 being the highest, to which a majority of responses were between one and five.

Suggestions on how to raise morale on the force included:
-- public and private support from City Council, Moore, command staff, public figures/politicians, the news media and the public;
-- higher wages and starting pay;