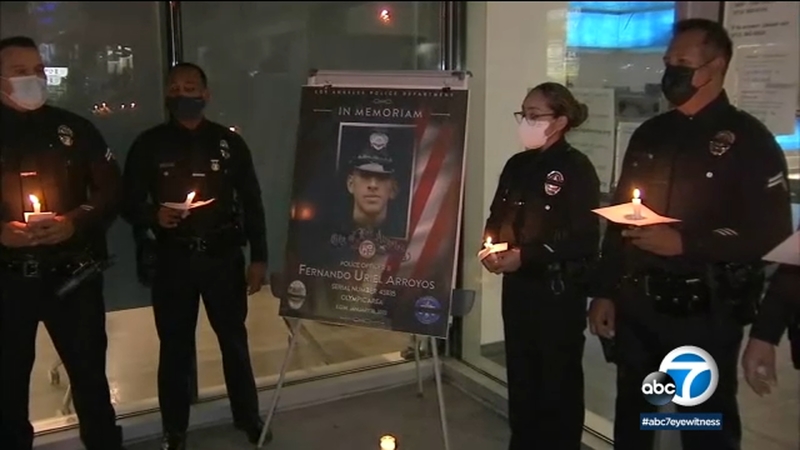 SOUTH LOS ANGELES (KABC) -- A pair of memorials were held to honor an off-duty Los Angeles police officer who was shot and killed in South L.A. after authorities announced the arrest of four people in connection with his death.

Officer Fernando Arroyos was killed Monday night during a robbery attempt as he and his girlfriend were house-hunting. The 27-year-old exchanged gunfire with the suspects, according to authorities.

A memorial of candles and flowers was set up outside LAPD's Olympic station, where he was assigned, and fellow officers and friends remembered him as a man who was dedicated to his job during a vigil Wednesday evening.

Four people have been arrested in connection with the killing of an off-duty Los Angeles Police Department officer who was shot while house-hunting in South L.A. with his girlfriend.

The mourning continued at his heartbroken family's home, with more LAPD members in attendance.

Arroyos' mother described her son as someone who simply wanted to serve his community and help his family.

Arroyos graduated with honors from UC Berkeley and fulfilled his dream of becoming an LAPD and giving back to the city he loved.

"It's important that we recognize the enormity of this loss. People come to law enforcement, they come to this work to make a difference," Moore added.

Authorities have not identified or released any details about the four suspects arrested for his murder, but the L.A. County Sheriff's Department has vowed that those responsible will be held accountable.