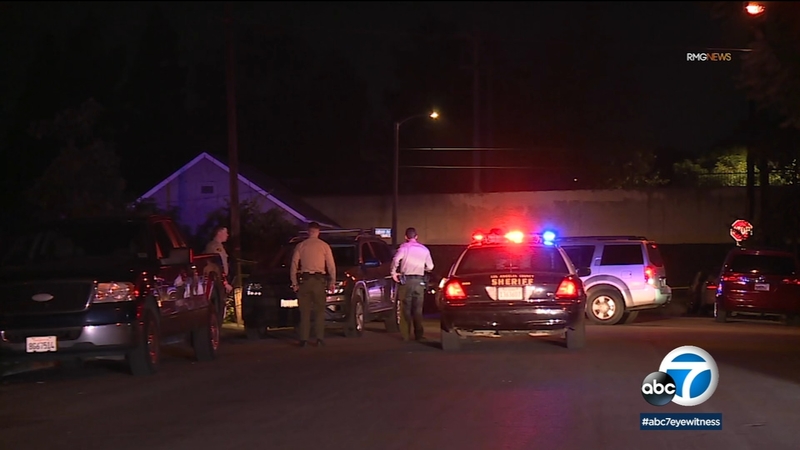 WALNUT PARK, Calif. (KABC) -- A young off-duty Los Angeles police officer was shot and killed during what is believed to be an armed robbery attempt in Walnut Park Monday evening.

The shooting happened near 87th and Beach streets around 9:16 p.m., according to the Los Angeles County Sheriff's Department, which is investigating the incident.

Investigators say a black pickup truck approached the victim and three suspects got out. Some type of argument ensued before an exchange of gunfire, in which the victim was struck. Officials said the officer was with a friend at the time.

Chief Michel Moore said two guns were found at the scene - one belonging to the officer and the other believed to have been dropped by the suspects.

Responding L.A. County sheriff's deputies transported the off-duty officer in their own patrol car to St. Francis Medical Center in Lynwood, where he was pronounced dead. The name of the police officer was not immediately released, but officials described him as young.

Today we grieve the loss of a young officer who was murdered while off duty. As we mourn his tragic loss, we ask that you keep his family and partners in your thoughts and prayers. pic.twitter.com/fj8ScZ4dDn

Early Tuesday morning, a procession escorted the officer's body from the hospital to the coroner's office.

"Tonight, we mourn the loss of one of our officers who was shot & killed in an armed robbery attempt. The officer was off-duty. We pray for the officer's family, and their fellow officers, during this time of pain and sorrow," the Los Angeles Police Protective League tweeted just after midnight Tuesday.

Further details, including information regarding a suspect or suspects, were unavailable. It's unclear if those suspects were wounded by the officer's gunfire.