Surveillance video shows a disturbing attack on a police officer inside the LAPD's San Pedro station.
KABC
By ABC7.com staff 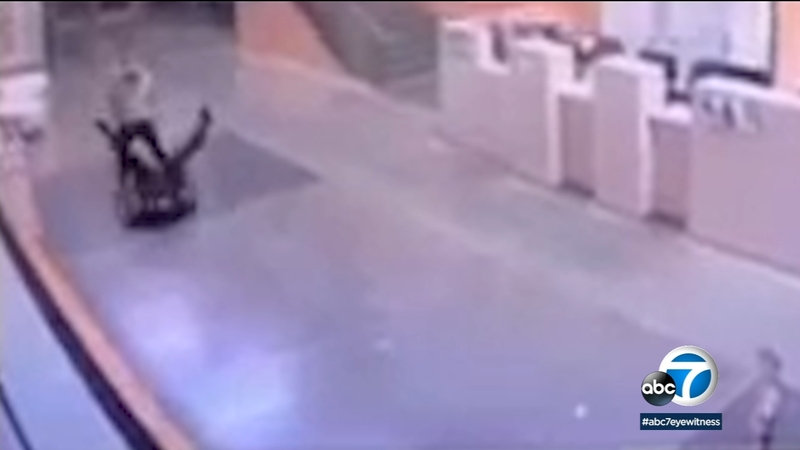 During the incident, a man walked into the San Pedro station's front lobby and got into a confrontation with an officer, assaulting him multiple times and firing the officer's own weapon without hitting anyone.

The video shows the desk officer walk toward the station's front doors, when a man in a straw hat walks in and confronts the officer, who starts backing up.

The Los Angeles Police Department says an officer was not shot, as had originally been feared, but was assaulted and injured during an altercation inside its station in San Pedro on Saturday night.

A few moments later the two men start fighting, and the police officer suddenly falls backward, hitting his head on the floor.

The security camera captures the two men fighting and rolling around on the station floor.

The man in the hat is able to wrestle away the officer's gun and hits the officer with it multiple times.

The attacker then stands up and starts to retreat back toward the front door, just as another officer comes into view from behind the station desk. She approaches the front door and then suddenly jumps for cover when a shot is fired. She is then seen pulling out her own gun.

Officers quickly swarmed the area and captured that attacker several blocks away.

He has been identified as 29-year-old Jose Guzman of Los Angeles.

He is expected to be in court Tuesday. Guzman is currently jailed and being held on $2.2 million bond.