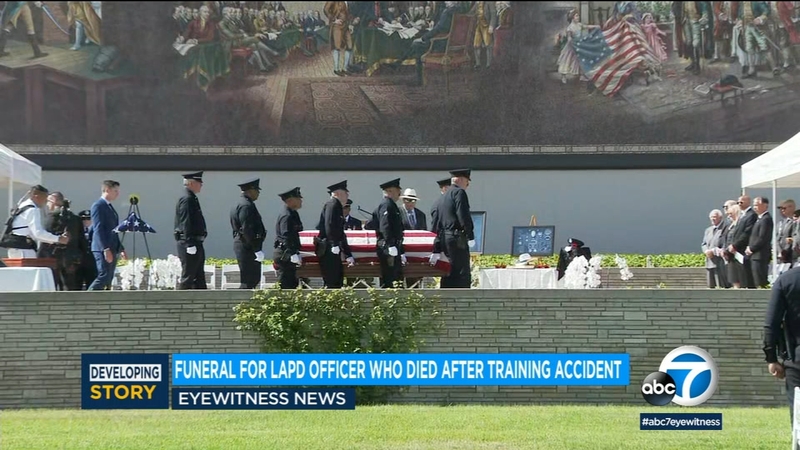 Tipping, 32, died May 29. He is survived by his parents, Richard and Shirley; his stepfather Bob; his siblings Kat and Tyler; and his girlfriend, Brittany.


The five-year department veteran worked out of the LAPD's Devonshire Division.

Tipping's father fought back tears as he paid tribute to his son at the funeral service, publicly professing "how much I love my son, how proud I am of him.''

"My son Houston was naturally kind,'' he said. "He genuinely cared about people. He had the perfect character to be an LAPD officer.''

According to LAPD Chief Michel Moore, Tipping was "an officer who held such promise for this city.''

Moore said earlier that Tipping was working as a bike instructor in a scenario that involved grappling with another officer.

During the exercise, Tipping fell to the floor and suffered a spinal cord injury. Other officers present initiated CPR until Los Angeles Fire Department paramedics arrived.


Moore called Tipping "a bright and uplifting young man with a full life in front of him.''

In a Twitter statement following Tipping's death, the chief expressed "Grief, sorrow and sadness,'' and added, "May God Welcome him home & comfort his family, friends & partners. Our work continues in a profession that at times calls for a cost that is so very high. Blessed are the Peacemakers.''

Moore said the department was conducting an investigation into the accident to identify any steps it can take to make sure a similar tragedy does not occur again.
EMBED More News Videos