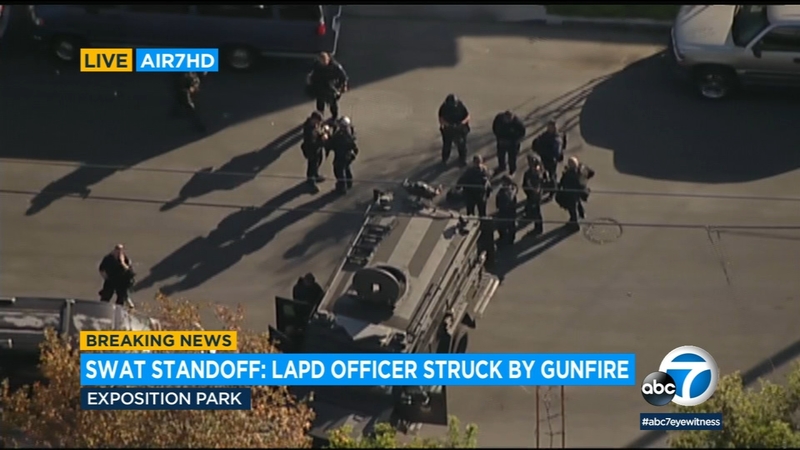 EXPOSITION PARK, LOS ANGELES (KABC) -- A suspect was killed in an exchange of gunfire and a SWAT officer was shot after an hours-long standoff in Exposition Park Tuesday afternoon, Los Angeles police said.

LAPD and a SWAT team responded around noon to the 1000 block of West 21 Street after reports of a man firing a rifle into the air in the backyard of a home, LAPD Chief Michel Moore said during a news conference.

Police attempted to persuade the man to surrender and exit the home he was holed up in, but when the suspect refused, the SWAT team deployed tear gas into the residence, Moore added.

The man then exited the home and "engaged officers on scene," prompting police to shoot.

Moore said the officer who was wounded was shot in the chest, but was wearing body armor at the time. He was also shot in the face and was transported to a hospital. The police chief added that the officer, who is in stable condition, is grateful to be alive. He is expected to survive his injuries.

The suspect died at the scene after exchanging gunfire with police.

The suspect's family tried to convince him to surrender and officers spoke to them prior to tear gas being deployed. The family was later evacuated along with neighbors near the area.

Moore said a long rifle and a handgun were recovered at the scene. Police believe the 37-year-old suspect may have been under the influence of drugs.