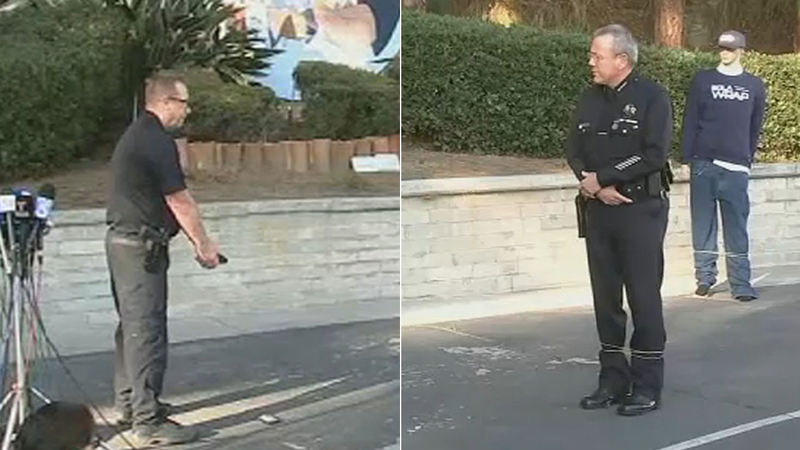 LOS ANGELES (KABC) -- The Los Angeles Police Department has a new crime-fighting tool they're testing out until next spring.

The BolaWrap may seem more like a superhero gadget but its real-world application could help the department deal with situations involving persons with mental health issues.

The handheld device made by Las Vegas-based Wrap Technologies, Inc. shoots an eight-foot long Kevlar cord. The cord has barbs attached to each end which catch around the person's legs or waist.

The sound struck you first. The $30 cartridge discharged from a small, green, remote like device and it sounded like a gunshot.

#LAPD Chief Michel Moore takes one for the team. Watch him test out the #BolaWrap technology today (if it looks familiar, it should!) which could alter outcome of police scenarios where an alternative to tasers is needed #abc7eyewitness pic.twitter.com/3Igg54Ji6b

Moore became the stand-in for a person police want to subdue but not tase.

"That person may be threatening with physical violence, he or she may have a stick or some type of a knife" the chief said.

Moore explains why this alternative could prove helpful to officers in specific types of situations: "That will allow the officers to not have to resort to things such as bean bags, 40 MMs or in the most perilous situations, deadly force itself."

The department will eventually hand out 200 BolaWraps to officers who complete training.

One hundred other police agencies across the country are trying it including Sacramento and San Diego County.

For the past year, the LAPD tried out the alternative to tasers, then consulted with the company to discuss small changes like using a color to match their other non-lethal weapon, tasers.

In Fresno this past October, police tased a man suspected of stabbing two people. They also used a Bola-Wrap. The man was eventually taken to the hospital and arrested.