Protester calls for changes at LAPD, says he was shot at point-blank range with rubber bullets 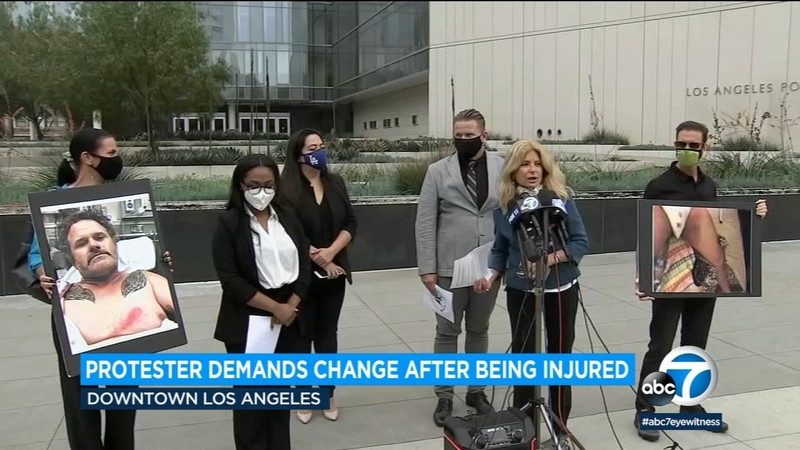 LOS ANGELES (KABC) -- A man who was shot with rubber bullets during a Black Lives Matter protest last month is calling on the Los Angeles Police Department to change its practices after he says he was seriously injured.

Bradley Steyn was part of the anti-apartheid movement in South Africa and says what he saw here in Southern California reminds him of that.

"It's brought back a lot of painful thoughts and memories," Steyn said during a Thursday press conference in front of LAPD headquarters.
Steyn took to the streets in the Fairfax District near the Grove on May 30, which saw protests over the death of George Floyd, when he claims he was intentionally shot with a rubber bullet in the groin by police.

"At the march, I was shot by a member of the LAPD with a rubber bullet in my testicles. One of my testicles ruptured and lead to me almost bleeding out and dying on the streets of Los Angeles," he said.

Steyn added that he was trying to help another protester when the incident happened, claiming that he was also beaten in the chest by officers with batons.

His attorney Lisa Bloom said that no police officers rendered any aid and he went to the hospital in a rideshare vehicle.

"We demand that rubber bullets be severely curtailed or banned. We demand rules requiring that they never be shot a point-blank range and never at someone's genitals or face," Bloom said.

"This apartheid-style of policing in the United States of citizens is disgusting," Steyn added, who preparing to file a lawsuit against the department.

In a written statement, the LAPD said it can't comment on the possible lawsuit. The statement reads, in part, as follows: "We are fully committed to investigating every allegation of misconduct or excessive force related to the recent protests. We have assigned 40 investigators to look into each alleged instance and will conduct a thorough investigation."

The department is currently investigating several allegations of misconduct, violations of LAPD policy and excessive force during the recent civil unrest.