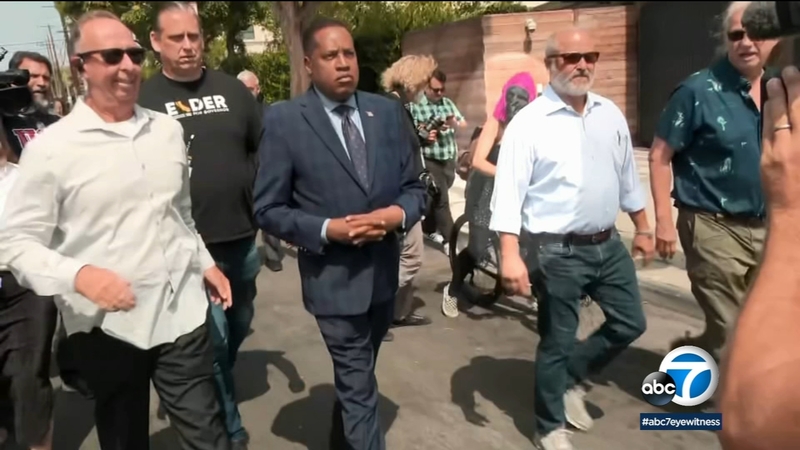 VENICE, LOS ANGELES (KABC) -- The Los Angeles Police Department has launched a battery investigation after an aide for Larry Elder was punched during a campaign event.

On Wednesday, during Elder's tour of a homeless encampment in Venice, those who live at the encampment at Sunset and 3rd weren't pleased to see the Republican candidate for governor, shouting at the conservative radio talk show host.

An egg was thrown at Elder by a woman wearing a gorilla mask, but the egg did not strike him. The LAPD says the aide approached the woman, who yelled profanities at him and then "struck the aide on the left side of his face with her open hand."

Another man wearing a grey T-shirt also attacked that aide, police said, punching him in the back of the head.

Larry Elder had to cut his campaign event short in Venice after he encountered an angry crowd and had an egg thrown at him.

The tour was cut short, and Elder was escorted to a waiting vehicle and was taken away by his security to another location in Venice.

Elder later said his security detail was also shot at with a pellet gun, but no one was seriously hurt.

Police are now seeking the public's help in identifying both suspects.