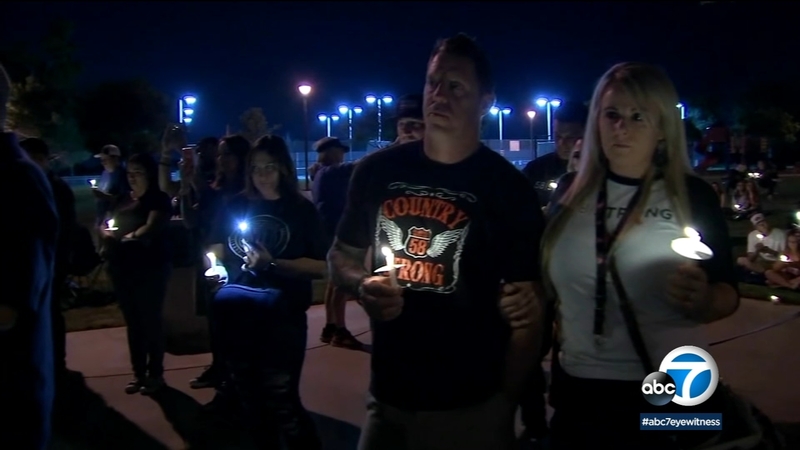 "I'm Norma. I'm one of the survivors and I just want to say ... how strong we all came together and how we have met so many amazing people," one woman told the crowd at the vigil. "No matter what he did to us, we all stand together."

Many country music fans from Corona and other Southern California cities were attending the Route 91 Harvest Festival four years ago when a gunman opened fire, killing 58 people. Two others died later. Hundreds were injured.

Many survivors are still struggling with the horrific memories.

"I had looked behind me and I saw a lady bleeding really badly on the ground," said Chrystal Adamson. Referring to her significant other, she added: "At that point I had told him, 'We need to get out of here. We have four kids at home.'"

The names of the deceased victims were read aloud during the vigil.
EMBED More News Videos

Vigils were held for Southern California people who were killed in the mass shooting in Las Vegas that happened during a country concert.

The gunman, Stephen Paddock, a 64-year-old retired postal service worker, accountant and real estate investor who became a high-stakes casino video poker player, killed himself before police reached him. Local and federal investigators concluded he meticulously planned the attack and appeared to seek notoriety, but they said they could not identify a clear motive.

Authorities including police, elected and government officials and people involved with the resiliency center refuse now to use his name.

MGM Resorts International, owner of the hotel and the concert venue, is donating 2 acres (0.8 hectare) for the memorial - just off the Strip at a spot near a church where people sought refuge and medical help during the shooting.

The company and its insurers have almost finished paying $800 million to more than 4,000 claimants in an out-of-court settlement reached a year ago that avoided negligence trials in several states. The company acknowledged no liability.

"It's good for the community and the victims that the case is resolved," Robert Eglet, a Las Vegas attorney who spent a year arranging the settlement, said Thursday. "And it was the right thing for MGM to do."