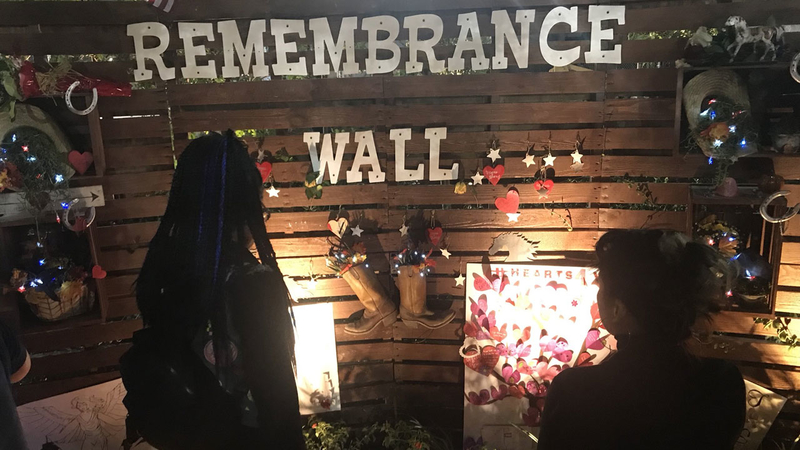 LAS VEGAS (KABC) -- The Las Vegas community was in need of healing and now people have a place to do just that after construction was completed on a healing garden.

The garden was unveiled Friday night, after volunteers worked around the clock to create it in less than a week's time. Everything was donated.

"This has become a center of humanity that is setting a standard around the world," Mayor Carolyn Goodman said.

There is a remembrance wall, where people can leave photos behind of those lost.

"You feel so heartsick when you see the wall and the lives that were lost. It's just so senseless," said Jamie Dehlem, of Henderson, Nevada.

There are also 58 trees of life planted there to honor the 58 people who were killed in the Las Vegas mass shooting Sunday night. Residents said the space is needed.

As people continue to try and make sense of the tragedy, heroes who saved lives amidst the chaos are revealed every day.

One of them is Mike Kordich, a San Bernardino County firefighter who was released from the hospital after being shot in the arm while performing CPR on a victim.

Another hero is Jimmy Grovom, a paramedic raised in Mission Viejo. After he was shot in the leg, he still saved multiple people from the barrage of gunfire.

"It's just what humans should do as human beings, just learn to love each other. There's so much hate going on right now. Just love each other, try to help each other out, and that's pretty much all I want people to take away from this," Grovom said.