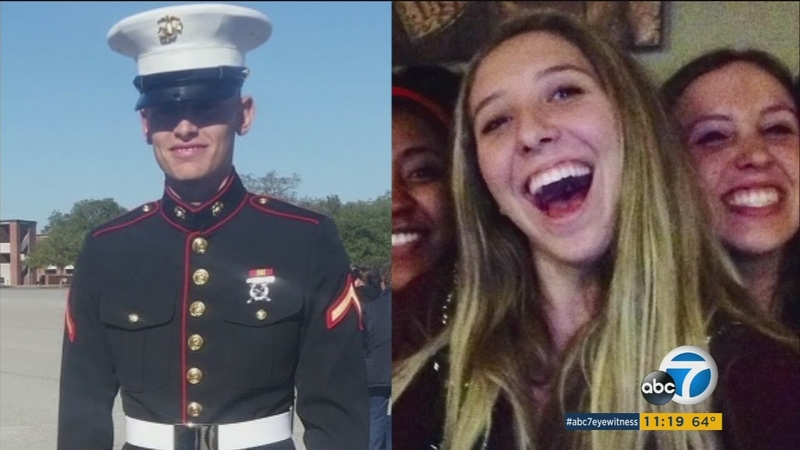 At the same time, U.S. Marine Austin Cox, based in Camp Pendleton, was enjoying the Route 91 Harvest Festival with his fellow Marine Mike Vura.

As shots rang out, the young woman from La Verne was hit twice. One bullet into her shoulder and another into her neck.

She collapsed, dropped her phone and was going in and out of consciousness.

The two Marines decided to run toward the gunfire and that's when Cox spotted Katrina in crisis. Even though he'd never met her before, he rushed to help.

"Really to just get there and help people," Cox said. "Once we got there we knew it was our job to help people."

Hannah was bleeding badly and Cox said he picked her up and made a run for it. He got her to Sunrise Medical Center.

"It's a miracle he was there and he found her or else she wouldn't be here with us," said Katrina's friend, Nicole Ragano.

A La Verne woman who was wounded in the Las Vegas shooting was carried to a hospital by a Marine she'd never met.

Katrina didn't have her phone and couldn't call her mom. She could barely speak but kept repeating her mother's phone number to Austin. Eventually, he was able to reach her.

"He said I will stay with her, I'm not going anywhere," said Katrina's mother, Loreto Hannah.

Loreto had also attended the bachelorette party celebrations but was tired and wanted to leave the Jason Aldean concert early. She separated from her daughter just three minutes before the gunfire began.

"It was 3 minutes that we got separated but seven hours to find her," she said.

Loreto said she "lost it" when she learned her daughter was in critical condition. When Katrina regained consciousness, she could barely speak out loud but could write.

Her mother responded, "one bad guy but look at all the people that are loving us?"

After being shot, Katrina Hannah could barely speak but could write.

Loreto said she also took a photo of Cox at the hospital while he still had her daughter's blood on his arms. She said she had to take a photo of him so she could show people who her "daughter's angel" is.

Cox said he's thankful that he was there to save Katrina.

"I think any Marine in my situation would do the exact same thing," he said.

Fifteen of Katrina's high school friends drove from Southern California to Las Vegas to be by her side. Nicole Ragano was among them.

"It wasn't a matter of if I would be able to come visit her, its a matter of how quickly I was able to see how she was doing," Nicole said.

Loreto said the support is overwhelming.