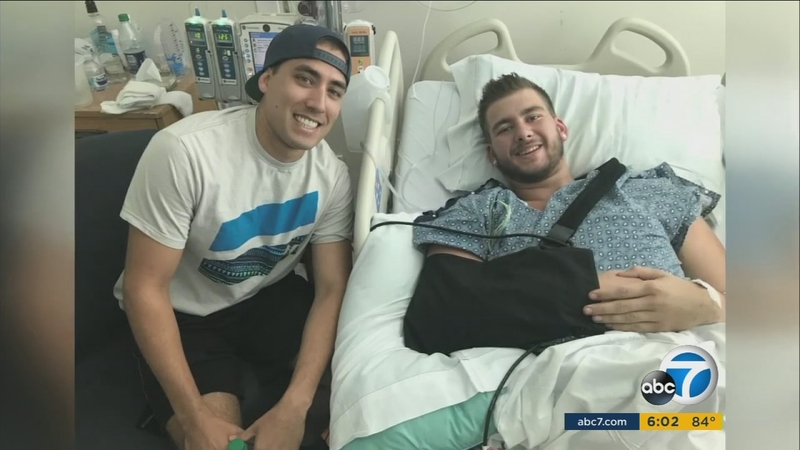 LAS VEGAS (KABC) -- Jimmy Grovom is a trained paramedic. But he never thought he'd need to work during his Las Vegas vacation.

The Mission Viejo native came to the Route 91 Harvest festival with his girlfriend, Briana, his brother, Matt, and a group of their friends.

They were enjoying the music when shots rang out. Jimmy knew it was time to get to work.

Amid the gunfire, Matt Grovom watched as a woman standing next to him was hit.

"When I first heard the shots, the first person I yelled for is my brother," he said. "That just says something about him right there."

Jimmy began to administer aid to that woman and then moved on to help someone else. Then there was another round of gunfire.

While helping a gunshot victim, Jimmy himself was shot in the leg. He didn't tell Matt about the gunshot wound, at first. He simply told him to run.

"He yelled, 'Get my girlfriend out of here,' and I knew I had to listen to him," Matt said. Jimmy believes that Matt helped save Briana's life.

Meanwhile, Jimmy Grovom continued to serve others, using his training as a paramedic in San Bernardino. He noticed a complete stranger named Sheldon Mack bleeding badly after suffering a gunshot wound to the abdomen.

Grovom used his finger to plug Mack's bullet wound and jumped on a truck headed to the hospital. Grovom stayed with Mack until doctors and nurses could take over.

Mack never even caught his name.

"Some hero came and saved me, came to take care of me," said Mack.

Earlier this week, ABC's David Muir interviewed Mack in his hospital room. He revealed that he was searching for the man who saved him.

One of Jimmy Grovom's friends saw the ABC News broadcast and helped arrange a reunion in Mack's room.

"Seeing him was one of the happiest times I've had in a long time," said Grovom.

Jimmy Grovum, a paramedic from Corona, was shot in the leg during #LVShooting.

It didn’t stop him from saving multiple lives afterwards. pic.twitter.com/gD6IUSSk4s

Mack's mother hugged Grovom and thanked him for saving her son's life.

"I was so happy to see him talking, doing well," Grovom said.

Mack said that when he gets out of the hospital, he wants to buy Grovom a beer.

Both Jimmy and Matt hope their story is a reminder about the goodness of the human spirit.

"For every one scumbag out there, there's hundreds of people willing to do whatever they can," said Matt.