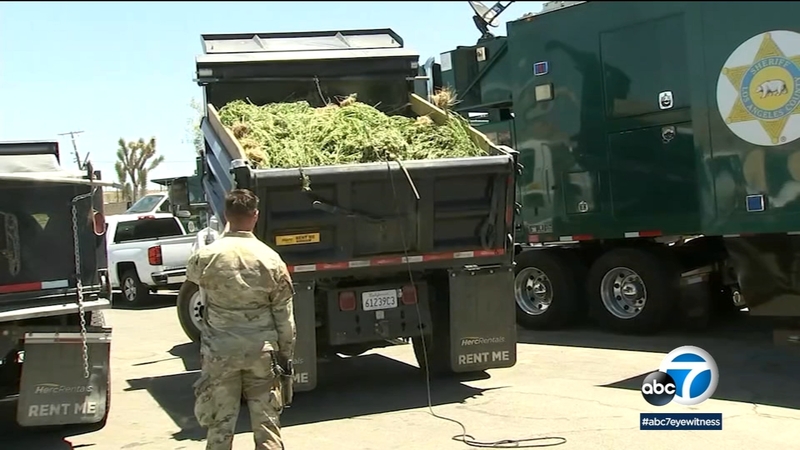 LANCASTER, Calif. (KABC) -- The Los Angeles County Sheriff's Department and several other agencies on Tuesday launched a massive raid on illegal marijuana grows in the Lancaster area, seizing millions of dollars worth of pot at sites allegedly linked to drug cartels, authorities said.

Described as "the largest operation ever to take place in the history of LASD," the crackdown was also conducted by members of other local law enforcement departments and the Drug Enforcement Administration.

Authorities made 23 arrests, seized five firearms and recovered two water trucks, according to a news release.

At an afternoon press conference, Sheriff Alex Villanueva told reporters that more than two dozen search warrants had been served so far, and numerous other locations were being targeted.

"We're going to continue until there's not a single marijuana grow left standing here in the high desert,'' Villanueva said. "That is a tall order, but it needs to happen to basically put this to an end,'' Villanueva said. "Because we have legal marijuana grows in California. They're very small in number, they're very tightly regulated and they're being put out of business by the illegal grows.''

Street racing could be to blame for a fiery crash in Palmdale that left two people dead, authorities say.

Villanueva said that in 2020, sheriff's detectives identified 150 illegal marijuana grows in the area, and the number increased this year to more than 500.

"That's how much it grew during the span of just one year -- during the pandemic," he said.

More than 400 personnel from various agencies were involved in the operation, authorities said.