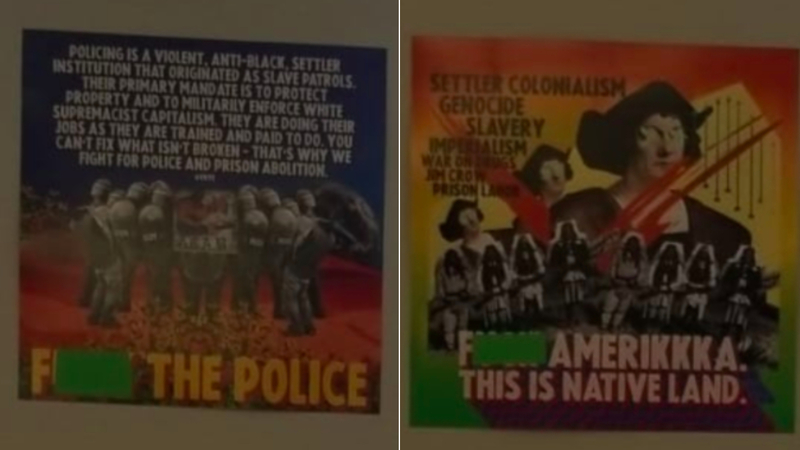 LOS ANGELES (KABC) -- The Los Angeles Unified School District has issued a statement after photos emerged of controversial posters in a history classroom at Alexander Hamilton High School on the Westside.

One of the posters included an apparent depiction of Christopher Columbus, alongside the words "settler colonialism, genocide, slavery, imperialism, war on drugs, Jim Crow, prison labor." The bottom of the poster read: "F--- AmeriKKKa. This is native land."

Another poster stated: "Policing is a violent, anti-Black, settler institution that originated as slave patrols. Their primary mandate is to protect property and to militarily enforce white supremacist capitalism." The bottom of that post read: "F--- the police."

The photo of the posters was shared on social media along with another photo that claimed to show several flags hanging on a wall in the same classroom. The flags represented Palestine, the Black Lives Matter movement, LGBTQ pride, and transgender pride.

"L.A. Unified is aware of the specific classroom decorations. The specific posters will be taken down. We maintain and uphold student and staff confidentiality and therefore cannot comment on any of our students or employees," a school district spokesperson said in a statement provided to ABC7.

"L.A. Unified holds firm its policy that students and adults in both schools and offices should treat all persons equally and respectfully and refrain from the willful or negligent use of slurs against any person on the basis of race, language spoken, color, sex, religion, handicap, national origin, immigration status, age, sexual orientation, or political belief," the statement said.