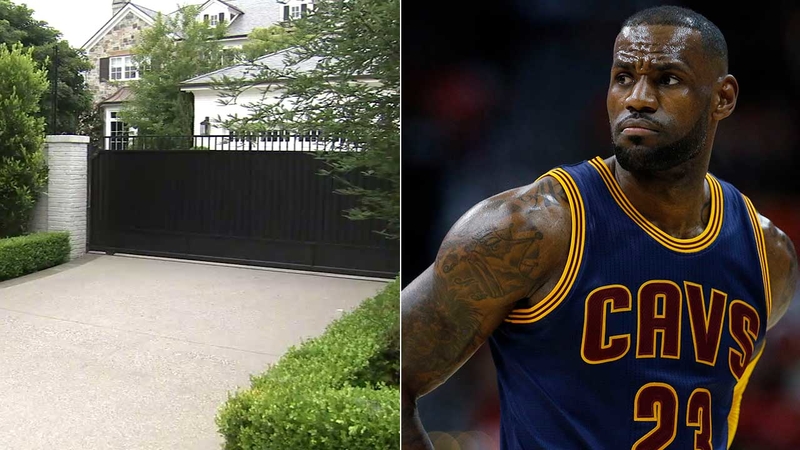 The vandalism was reported at around 6:45 a.m. Los Angeles Police Department officials said the Cleveland Cavaliers star was not at the residence at the time of the incident.

Investigators said they will look into surveillance footage from the area, hoping to find clues as to who was behind the vandalism.

By the time officers arrived at the home, the racial slur was covered up by property management, police said.

The incident is technically being investigated as a hate crime, though it has yet to be officially classified as such.

The LAPD's West L.A. Division is investigating the incident.

James' neighbors came to his defense and left flowers near his gate. Some said they were proud to have him as a neighbor.

James was likely with the rest of his team getting ready for Game 1 of the NBA Finals, which starts on Thursday.

At an NBA news conference held Wednesday afternoon, James was asked by media to comment on the incident.

"As I sit here on the eve of one of the greatest sporting events that we have in sports, race and what's going on comes again on my behalf and my family's behalf," James said.

James said the most important thing is that his family is safe.

"But I mean I look at it as this - if this will shed a light and continue to keep the conversation going on my behalf, then I'm OK with it. My family is safe. At the end of the day, they're safe, and that's the most important," he said.

The athlete reflected on the incident, saying it illustrates what is going on in this country.

"It just goes to show that racism will always be a part of the world, a part of America. Hate in America, especially for African-Americans, is living every day. Even though it is concealed most of the time, even though people hide their faces and will say things about you, when they see you, they smile in your face. It's alive every single day," he said.

James then mentioned Emmett Till, an African-American teenager killed in Mississippi in the 50s. He said the reason why Till's mother decided to have an open casket at her son's funeral was because "she wanted to show the world what her son went through, as far as a hate crime and being black in America."

"No matter how much money you have, no matter how famous you are, no matter how many people admire you, being black in America is tough, and we've got a long way to go for us as a society and for us as African-Americans until we feel equal in America," James said.
Related topics:
brentwoodlos angeleslos angeles countycelebritynba finalslapdnbavandalismbasketballsportscleveland cavaliers
Copyright © 2022 KABC Television, LLC. All rights reserved.
TOP STORIES
Man accused of fatally stabbing UCLA grad student arrested
Voting bill collapses, Democrats unable to change filibuster
LA County sees 94% jump in homicides in 2 years, LASD stats show
TX mom pregnant with 6th child dies from COVID complications
Increase in SoCalGas bills a shock to some local customers
Homeowners 'wasting water' will get more than a fine, officials say
Vice President Kamala Harris to visit San Bernardino on Friday
Show More
COVID-19: 59 new deaths in LA County, positivity rate at schools drops
Man charged in attack on OC vaccine-clinic workers
Starbucks no longer requiring US workers to be vaccinated
Cardi B offers to pay for funerals of all 17 Bronx fire victims
Man sentenced to life in prison for violent crime spree in LA County
More TOP STORIES News