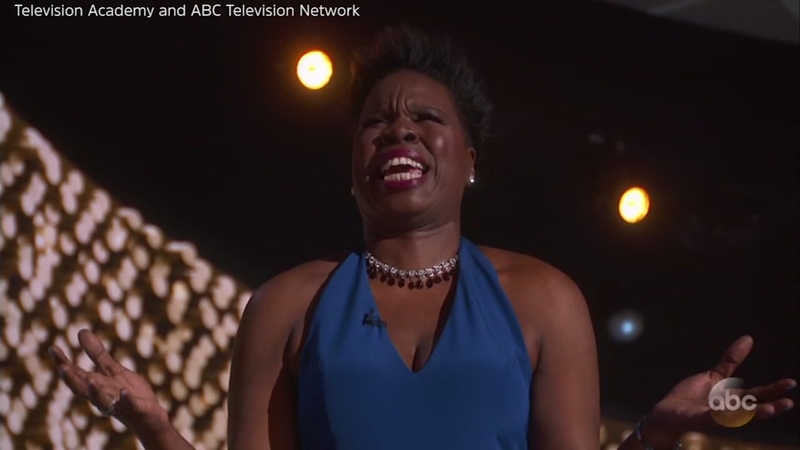 In a hilarious show-stopping moment, actress and comedienne Leslie Jones turned to comedy to discuss a painful subject that had pushed her to quit Twitter earlier this year.

As three accountants from the firm Ernst & Young were explaining how the Emmys voting ballots work, Jones interrupted to suggest the men take on a new task: protecting her Twitter account.

"Thank you so much Ernst & Young," Jones began. "I don't know who this third dude is, but I really appreciate all of the hard work you do, but let's be real. Y'all are protecting something that nobody is trying to steal."

"Since you good at keeping things safe," Jones continued, "I got a job for you: my Twitter account! Put that in the vault, please!"

Earlier this year, Jones had been the target of many misogynistic and racist tweets. The hateful attacks by internet trolls escalated to hacking Jones' Twitter account and personal website, leaking personal information and nude photos of the actress. Jones subsequently left the social media site in July, prompting Ghostbusters director to start a #LoveForLeslieJ hashtag.

"Y'all are using your skills to protect Best Voiceover in a French Sitcom? Meanwhile, I'm butt naked on CNN!" Jones added.

After the Emmy Awards, Jones posted a photo of herself and the Emmy-winning Mr. Robot star Rami Malek, suggesting his hacktivist character could help find those who hacked her account.

Do you think he could help me catch hacker lmao!! pic.twitter.com/Isk2DTlzC8