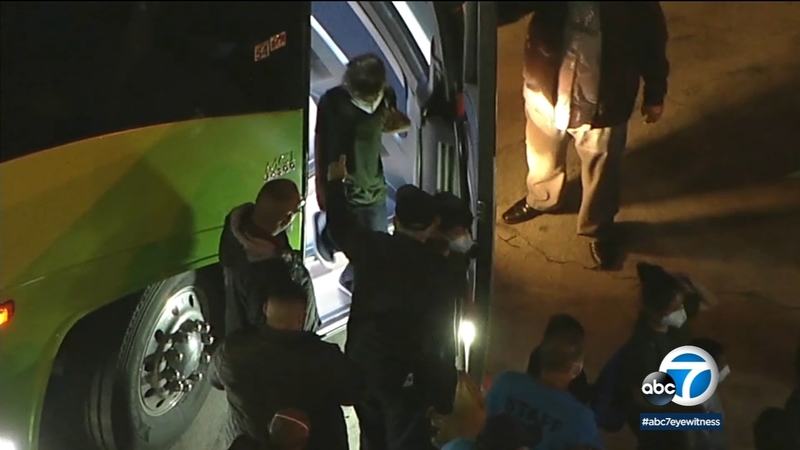 LONG BEACH, Calif. (KABC) -- Around 100 migrant children arrived at the Long Beach Convention Center Thursday, beginning its operation as a shelter that will house unaccompanied minors from the U.S.-Mexico border until they can be reunited with family or placed with sponsors.

The first group of unaccompanied migrant children were seen stepping off the buses after arriving at the Convention Center. According to the U.S Department of Health and Human Services, the children will receive medical checks, clothing, toiletries, food and snacks.

"We absolutely should ensure that these facilities are quality and are places that are focused on the child and are really centered around helping,'' Garcia said.

He noted that the migrant children often are arriving at the U.S.-Mexico border "with no parents, no adults. They don't have their family with them.'' Such unaccompanied children can then wind up in detention facilities.

"These humanitarian shelters are opening up here in California and across the country to bring children into a more humane setting, and hopefully reunifying them with (family),'' Garcia said.

Similar facilities are already operating in cities including San Diego and Dallas, and one will soon open at the Pomona Fairplex.

The Long Beach Convention Center will be able to house as many as 1,000 children. According to HHS, it will house girls aged 17 and younger, and boys under age 12. Due to events being held at the convention center in the fall, the housing setting and services will end by Aug. 2.

"Providing unaccompanied children a safe, healthy place is both our legal and moral obligation,'' HHS Secretary Xavier Becerra said. "In the past month, we've made great strides expanding our capacity to meet those obligations while we work to safely and swiftly unify children with a family member or responsible sponsor. I want to express our deep appreciation to Mayor Robert Garcia and the civic leaders and community of Long Beach for the respect and hospitality extended to the children and the team at HHS. While the work has only begun, we're on the right path with reliable partners to get this done right.''

Heartbreaking video shows a young boy sobbing and walking by himself in Texas near the border after he says he was abandoned by a large group he was traveling with.

Garcia said the HHS has a goal of reuniting children at the shelter with family or sponsors within seven to 10 days, but some cases can take longer.

The convention center site will place the children in cots for sleeping. It also has indoor and outdoor recreational space and a full-size medical clinic operated by UCLA.

Garcia noted that he was 5 years old when he came to the United States with his family, "poor and without a lot of support'' from the federal government.

"For me it's very personal that each child is welcomed,'' he said.

Garcia said he was grateful there were "welcoming Americans'' who "showed us kindness and love and eventually guided us through a very complex process to become citizens.''

"It breaks my heart we have a system today where children cannot receive the same opportunity I received,'' he said.

The city has established an online portal through its website, www.longbeach.gov, providing details of ways residents can support the unaccompanied children.

The Long Beach Community Foundation has also set up a Migrant Children Support Fund for people to donate money to offer assistance or other resources to the children. The shelter operation itself is being fully funded by the U.S. Department of Health and Human Services.

The city and Long Beach Convention & Visitors Bureau on Wednesday announced a book drive to collect reading materials for the children.

"Long Beach is known for being a welcoming community and the donations of new books will truly enhance the children's stay,'' Long Beach Public Library Director Glenda Williams said.

Every year, hundreds of thousands of migrants from different parts of the world arrive at the U.S.-Mexico border. So, what is happening right now?

Officials are asking for donations of leisure books'' for grade levels kindergarten through young adult. The books can be in English or Spanish -- or both -- and must be new. Textbooks are not being requested.

Donations can also be made at the Terrace Theater, 300 E. Ocean Blvd.

Federal officials say the goal is for the children to remain at the shelters for no more than 30 to 35 days.

Bonnie Preston, acting regional director for the U.S. Department of Health and Human Services, said earlier this month that a majority of the unaccompanied children arriving at the border come with names and phone numbers of sponsors in the United States to show border patrol agents after turning themselves over.

However, before a child can be placed, the sponsor has to "be vetted, and it takes time,'' Preston said.

In some cases, if the sponsor doesn't seem like a safe option, the children end up staying in HHS custody in a long-term care facility that provides additional services, including county services to find a non-relative guardianship or foster placement, according to Preston.

The Long Beach Convention Center is also being used by the city as a COVID-19 vaccination site, and the shelter is not expected to impact that operation.