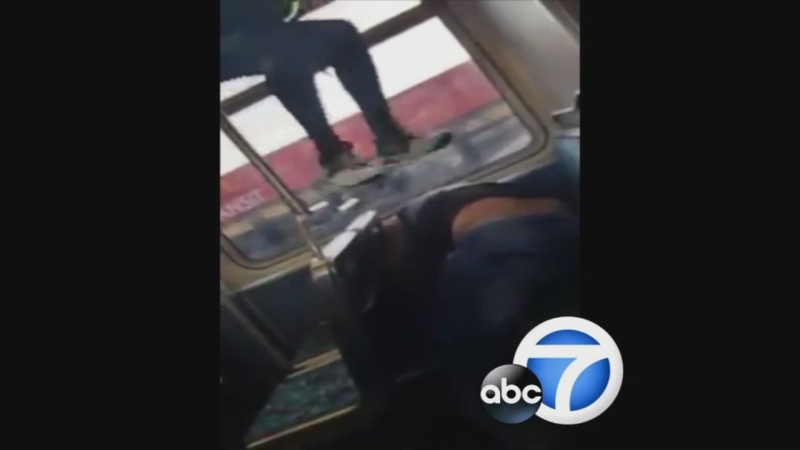 LONG BEACH, Calif. (KABC) -- A woman was caught on camera brutally beating a man on a Metro train in Long Beach after witnesses said he called her racial slurs.

An eyewitness, who asked not be identified, said the confrontation happened on the Metro Blue Line at about 7 p.m. on Monday.

According to the eyewitness, the man appeared to be intoxicated and said several racist slurs to people on the train, including the woman.

The eyewitness said after the man called the woman racial slurs she began hitting him.

In video obtained by ABC7, the woman can be seen kicking the man in the face, causing him to fall to the ground between two seats on the train where he remained motionless.

The video then shows the woman jump on top of one of the seats and begin to kick and stomp the man repeatedly without anyone attempting to stop her.

"Don't kill him," an eyewitness was heard saying multiple times.

The video shows the woman delivering dozens of blows as the man remained motionless on the ground.

She eventually stepped over him and walked away.

The man remained on the ground in obvious pain, and the next 30 seconds of video showed no one coming to his aid.

The eyewitness told ABC7 that eventually someone initiated the emergency stop and the train operator was notified.

Both the man and woman exited the train before police could arrive, according to the eyewitness.