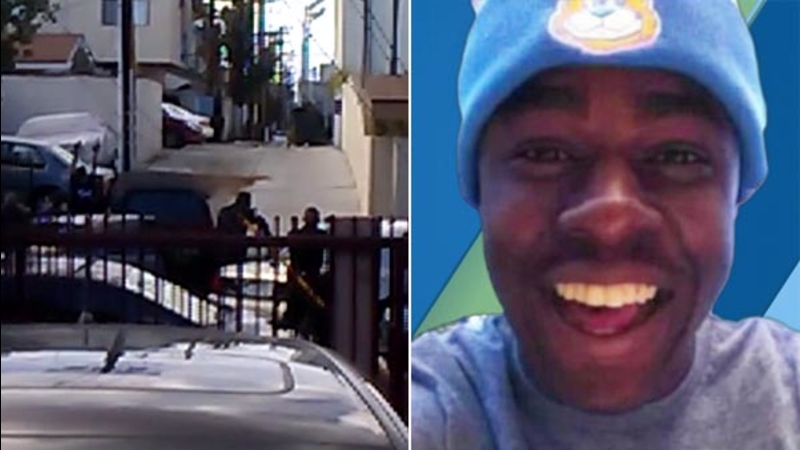 LONG BEACH, Calif. (KABC) -- New video was released after a man with an airsoft gun was shot and killed by Long Beach police on May 7.

The attorney for the family of Lionel Gibson released the video on Wednesday.

The 21-year-old was shot at 21st Street and Locust Avenue after officers said they responded to a call about a man with an Uzi.

When officers arrived at the scene, they said a man armed with what appeared to be gun was talking to a man near a parked car.

Authorities said officers gave several commands for Gibson to put his hands up, and opened fire after they claimed he did not comply and reached his hand toward the butt of the gun in his waistband.

Family and friends disputed the account given by the police, stating Gibson was never given a chance to raise his hands.

On Wednesday, Gibson's family and civil rights activists gathered near the site of the shooting to hold a vigil.

"We want justice. We want something to happen to the police. They're getting paid vacation and coming back to work in two months or something, while we mourn. He's gone forever. We're never going to see him again," Gibson's friend Ashleigh Simms said.

"We're here to continue to keep uplifting his name, uplift the spirit of what he represented with this community," Rev. K.W. Tulloss, regional director with the National Action Network said. "There are many people here that loved him. His family loved him. And for his life to be taken on the basis of a toy gun is something that we will not stand for."

When ABC7 reached out to Long Beach police for comment, they stated, "Given what officers were presented with and how quickly situations unfold, we don't have the ability to make a determination on the authenticity of the weapon in a split second. Officers have to deal with what they face within seconds."
Related topics:
long beachlos angeles countypolice shootingofficer involved shootingbb gunpellet gun
Copyright © 2021 KABC-TV. All Rights Reserved.
TOP STORIES
LA County issues order requiring all county employees to be vaccinated
Corona shooting suspect blames voices in his head
Dixie Fire engulfs NorCal town, leveling businesses
LA to consider requiring vaccination to enter public indoor spaces
Man steals truck after getting out of Glendale jail, police say
Driver kills 91-year-old woman in South LA, flees scene
10 killed when van crashed into pole near border, DPS says
Show More
Child under 12 among new COVID deaths reported in LA County
SoCal congressman introduces legislation for 4-day workweek
Mexico sues U.S. gunmakers, blaming them for bloodshed
Man arrested for planting Molotov cocktails at Metro station
Nursing home to workers: Get vaccine or lose your job
More TOP STORIES News