Eddie F. Gonzalez was recently terminated from his job following a 5-0 vote by the school board.
KABC
By Jory Rand 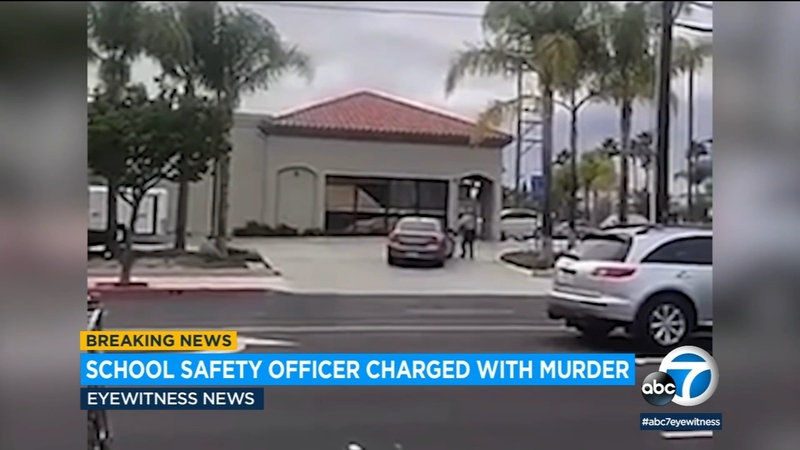 The DA made the announcement at an afternoon news conference, where he described the death of Manuela "Mona" Rodriguez as "unfortunate" and "unnecessary."

"We must hold accountable the people we have placed in positions of trust to protect us," Gascón said. "That is especially true for the armed personnel we traditionally have relied upon to guard our children on their way to and from and at school."

Rodriguez was shot during an incident near Millikan High School on Sept. 27. The officer, Eddie F. Gonzalez, was patrolling an area near the school when he noticed an altercation between Rodriguez and a teenage girl, according to authorities.

Rodriguez, the mother of a 5-month-old boy, was shot in the head by Gonzalez while she was a passenger in a moving vehicle in a parking lot near the school, authorities said. A bystander captured the deadly confrontation on video.

The woman died Oct. 5 after being on life support for about a week.

The Long Beach Unified School district confirmed Gonzalez as the officer who shot Rodriguez. He was terminated from his job following a 5-0 vote by the school board.

"The unanimous decision to terminate this officer's employment occurred after our internal review clearly revealed areas where this employee violated District policy, and did not meet our expectations," said the district in a statement shortly after the charge came down. "The 'Use of Force' policy used by our School Safety Office states that officers 1) shall not fire at a fleeing person, 2) shall not fire at a moving vehicle, and 3) shall not fire through a vehicle window unless circumstances clearly warrant the use of a firearm as a final means of defense. Based on our careful review, we found that our internal policy was violated."

The district continued saying, "We thank the Long Beach Police Department and the Los Angeles County District Attorney's Office for their diligent work and swift action on this case. We will continue to monitor the progress of the criminal case and will defer questions on investigatory matters to law enforcement. We acknowledge the impact of this tragedy and we again extend our sincerest condolences to everyone who has been impacted, especially the family, friends and loved ones of the shooting victim, Manuela Rodriguez."

Gonzalez was arrested in Orange on Wednesday and is currently in custody at the Long Beach City Jail.

He is set to be arraigned on Friday.

In the aftermath of the shooting, Rodriguez's friends and family pointed out that she was unarmed at the time of the incident. Before Wednesday's announcement, they had repeatedly called for the school officer to be charged with murder.

Oscar Rodriguez, the victim's brother, spoke out after Gonzalez was charged and said his immediate thought when he heard the news was, "It's about time."

"It shouldn't have taken a whole month," he said.

Rodriguez, who held back tears during a news conference on Wednesday, said he considers the charge "the first step toward justice" and hopes this will help him and his family heal.

Oscar Rodriguez, the victim's brother, spoke out after Gonzalez was charged and said his immediate thought when he heard the news was, "It's about time."

"You don't really realize what kind of person someone is until they're gone," said the brother. "My sister was amazing. She's one of the persons that helped me out in my time of troubles when I did have them as a young child. She was there for me. She helped me heal as well, and now that she's gone, I don't know how to heal."

He said he is not sure if he or his family plans on attending any of Gonzalez's court hearings.