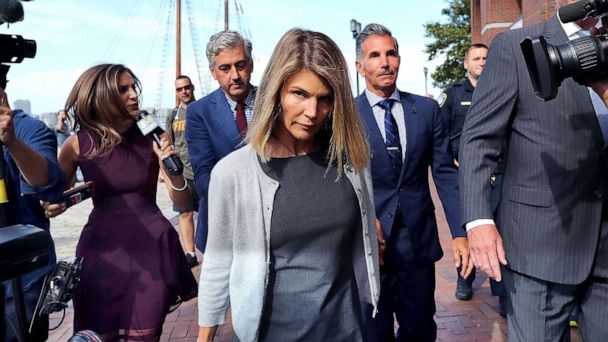 Lori Loughlin and her husband, Mossimo Giannulli, pleaded guilty, via a Zoom video call, to a federal judge for their roles in the massive college admissions scam.

The "Full House" actress and fashion designer appeared on two different screens as they entered pleas on conspiracy charges to Judge Nathaniel Gorton of the U.S. Attorney's Office in Boston.

Loughlin and Giannulli had been accused of paying Rick Singer $500,000 to get their daughters into the University of Southern California as crew recruits. Neither girl had ever rowed competitively.

"Giannulli emailed Singer a doctored photo of daughter Olivia Jade on a rowing machine to cast her as an experienced coxswain and made purported charitable payments, to facilitate his daughter's fraudulent admission to USC," according to U.S. Attorney Eric Rosen. "They conspired with Rick Singer and others to commit wire fraud."

The couple were slated to go to trial in the fall. Rosen said prosecutors would have used recorded telephone calls, documents, emails and witness testimony to prove their guilt.

In pleading guilty, the couple dropped previous assertions that their payments were charitable and prosecutors had withheld exculpatory evidence.

Prosecutors have charged over 50 suspects, including parents and coaches, in the investigation that's been dubbed "Varsity Blues."

Prosecutors have recommended that Loughlin serve two months and Giannulli serve five months, but the judge hasn't yet decided. Each is scheduled to be sentenced Aug. 21.

Rosen noted that Loughlin was facing a maximum sentence of 20 years in prison.

There's a provision in the plea deal to wait at least 90 days after the judge imposes sentences before they are sent to prison. The couple are the 23rd and 24th suspects to plead guilty to charges related to the case.

Later Friday afternoon, the U.S. Attorney's Office said another parent involved in the scandal pleaded guilty to conspiracy to commit mail fraud. Peter Dameris, 60, of Pacific Palisades, California, admitted to paying Singer $300,000 to help facilitate his son's purported recruitment to Georgetown University as a tennis player, even though the son didn't play competitively.

The government will recommend a sentence of time served, 21 months of home confinement, a fine of $95,000 and restitution, according to the U.S. Attorney's Office.

The scandal took place between 2011 and 2018 and was spearheaded by Singer, who pleaded guilty and helped the FBI investigate the parents. He orchestrated a system in which parents paid bribes to coaches and college administrators to get their children into elite colleges.

Singer, who was sentenced to three years of supervised release in exchange for his cooperation, also helped parents get stand-ins to take admissions tests for their children.

The conspirators went through great lengths to cheat, using tactics such as lying about students' athletic histories and creating phony documents that indicated students had learning disabilities.