The ordinance would also prohibit employers from funding the minimum wage increase by laying off workers or cutting hours.
City News Service 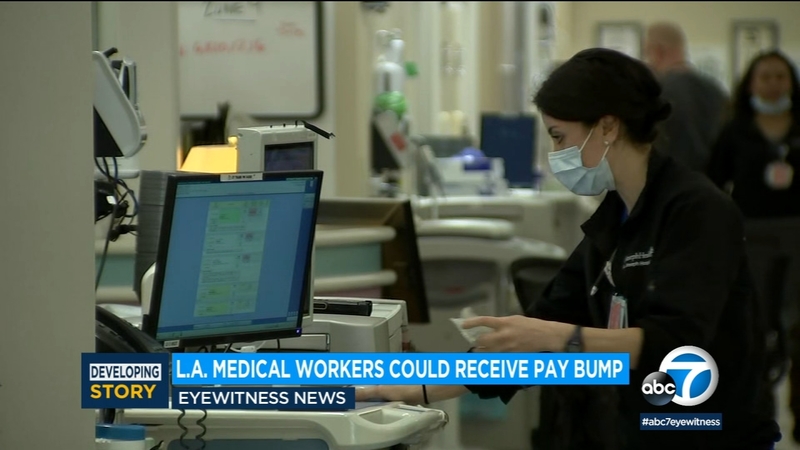 LOS ANGELES (CNS) -- The Los Angeles City Council tentatively approved an ordinance Wednesday that would raise the minimum wage for people working at covered health care facilities in the city to $25 per hour.

The "Minimum Wage for Employees Working at Healthcare Facilities'' initiative, which was brought to the council through a successful petition drive, would raise the workers' minimum wage and have it adjusted annually to account for increases in the cost of living.

The ordinance would also prohibit employers from funding the minimum wage increase by laying off workers or reducing benefits or hours.

The council had the choice of either adopting the initiative or putting it before voters.

On a 10-2 vote, the council opted to adopt the measure without going to a public vote.

Because the vote was not unanimous, the issue will have to return to the council next week for a second vote.

People who work for health care facilities in Los Angeles do not have their own minimum wage law and are included under the city's general minimum wage of $15, which will increase to $16.04 on July 1.

Los Angeles' minimum wage is based on the region's Consumer Price Index for Urban Wage Earners and Clerical Workers in the Los Angeles metropolitan area.

Several workers spoke to the council before the vote, with one saying he has to work outside jobs -- such as painting houses or doing construction -- to make ends meet outside of his job.

Another told the council people working at health care facilities should be able to focus on their patients without worrying about having enough money to feed their families.

Some health care industry representatives spoke against the idea, with one urging the council to put the matter before voters so they could fully weigh the issues, while also warning it will create an unfair playing field for some area clinics that will have to dramatically raise wages to compete amid a limited workforce.

Councilman Paul Koretz said he is concerned about the health care industry in general, saying it can't keep up with the need for workers.

"Especially during the pandemic when people were burned out from incredibly long hours,'' he said. "They were burned out from people in their care dying ... Obviously all of you that are in the health care field love helping people. You wouldn't do it otherwise because the financial remuneration isn't enough. Especially at this level -- people who risk their lives when they could be working at Target, or working at McDonald's ... without the risk, without the hard work, without the burnout.''

The No on the Los Angeles Unequal Pay Measure coalition criticized the tentative approval of the proposed ordinance.

"The Los Angeles City Council's hasty adoption of this inequitable measure is unfair for workers, costly for patients and risky for Los Angeles,'' the statement said. "The vast majority of health care workers in the city will be excluded by this discriminatory measure, as the wage standard only applies to workers at private hospitals and dialysis clinics, but completely excludes workers who do the exact same job at our city's public hospitals, community clinics, Federally Qualified Health Centers, nursing homes, urgent care centers, and many other facilities. In fact, the measure excludes workers at 90% of health care facilities in the city. In addition to being inequitable and unfair, the ordinance will jeopardize access to care at local health care providers - especially community clinics and those providers that care for underserved populations. The City Council should have put this measure to the November ballot to give the voters of Los Angeles the choice to vote on this inequitable policy.''

According to its website, the coalition is funded by the California Association of Hospitals and Healthcare Systems.