The sheriff says more than 4,000 workers are facing possible termination, but county supervisors say it should still be enforced.
KABC 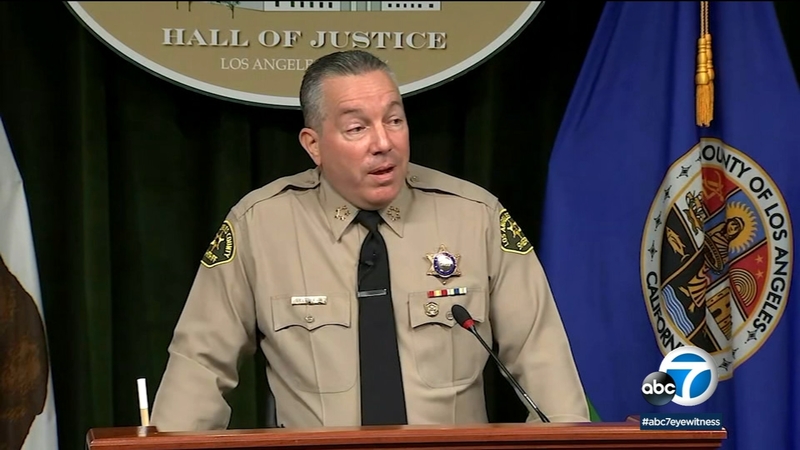 LOS ANGELES (KABC) -- Los Angeles County leaders are calling out Sheriff Alex Villanueva for his decision not to enforce the county's vaccine mandate, saying he's putting deputies and the public at unnecessary risk.

During a news conference on Tuesday, Villanueva said more than 4,000 sheriff's department employees are facing possible termination and said he worries there could be a mass exodus in the department. He also claims LASD is already severely understaffed.

The Board of Supervisors passed an executive order requiring all county employees, including sheriff's deputies, to register their vaccination status by Oct. 1, but Villanueva believes a mandate is not the way to go.

"I'm looking at the risk that each person is baring, and the collective risk does not justify this type of an intrusion," he said. "I think that should be up to the individual."

He went on to say the decision to issue a vaccine mandate is "arbitrary," pointing blame at the county's Board of Supervisors.

"There's only one county that's trying to defund and destaff the Sheriff's Department. That's Los Angeles County," Villanueva said. "In fact, they're unique in the entire nation. All of the areas that have had issues with defunding law enforcement - New York, Chicago, Minneapolis, Portland, Seattle - they've already back peddled, done a 180, and now fully funded law enforcement. In fact, now they're begging to get people to join their ranks because they were depleted because of the whole defunding movement. The only one entity in the entire nation that's dead fast on defunding is the L.A. County Board of Supervisors."

When a reporter asked him why, he responded saying, "They have a very weird group of people that are in charge."

"They worship at the altar of 'wokeism,' and they don't understand that their own community is saying, 'No. We want to see deputies on the street. We want to see reform can be made, but not eliminating the criminal justice system and not taking cops away from the street.' That's the last thing they want to see."

Supervisor Janice Hahn shot back at the sheriff and accused him of sexism for his criticisms against the all-female board.

"Sometimes I feel like it's because we're five women," she said. "I think [Villanueva] thinks he has the license to bully us, to harass us, to use his press conferences to malign us, to put our pictures up and call us 'architects of failure.' I'm not sure he would do that if it were five men."

"Our County's COVID-19 vaccine mandate for employees is an important part of our commitment to keep the public safe from a deadly virus," she said. "It's unfortunate that the Sheriff won't engage in dialogue with me to figure out a solution. I am committed to supporting and listening to our Sheriff's rank and file to get to the bottom of what barriers and obstacles they are facing so we can reach a resolution. Ultimately, we all share a commitment to public safety."

The sheriff said that as of Tuesday morning, 51.7% of the department's roughly 16,000 employees are fully vaccinated. Among sworn personnel, however, the figure is only 42.8%, while it is 67.2% among professional civilian staff.

Sheriff Alex Villanueva, who oversees the largest sheriff's department in the county with roughly 18,000 employees, said Thursday in a Facebook Live event that he does not plan to carry out the county's mandate.

The way it stands now, with about 51.7% of employees fully vaccinated, 4,185 personnel could be terminated.

"That is the size of almost our entire patrol operation right there," Villanueva said. "Similar, it's almost the size of our entire custody division operation. So imagine what would happen if every one of these (people) were terminated."

Meanwhile, LAPD Chief Michel Moore said Tuesday that 1,357 department employees have not submitted their vaccination status as of Friday.

"Those are the first individuals that we will be meeting with to provide them a notice of the mandatory vaccination requirements, and providing them 48 hours in which to identify that status and enter into an agreement of twice a week testing," Moore said.