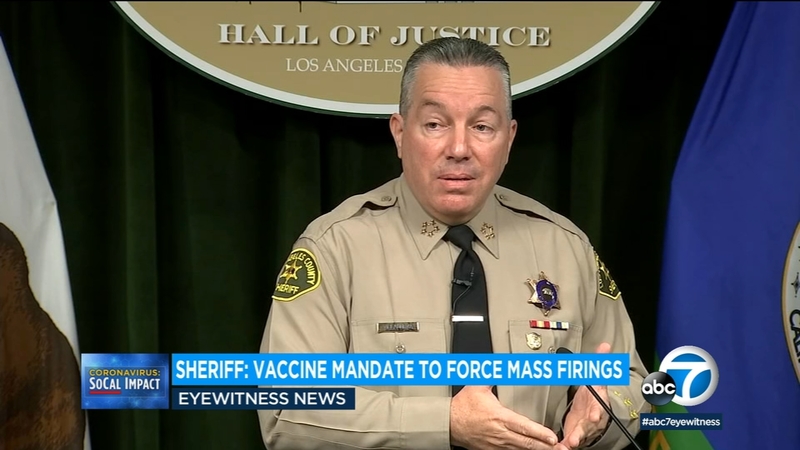 Speaking at a downtown Los Angeles news conference, the sheriff said that as of Tuesday morning, 51.7% of the department's roughly 16,000 employees are fully vaccinated. Among sworn personnel, however, the figure is only 42.8%, while it is 67.2% among professional civilian staff.

Villanueva worries there could be a mass exodus in the sheriff's department and claims LASD is already severely understaffed.

The sheriff said he sees an increase in retirements of almost 20%.

Sheriff Alex Villanueva, who oversees the largest sheriff's department in the county with roughly 18,000 employees, said Thursday in a Facebook Live event that he does not plan to carry out the county's mandate.

The way it stands now, with about 51.7% of employees fully vaccinated, 4,185 personnel could be terminated.

"That is the size of almost our entire patrol operation right there," Villanueva said. "Similar, it's almost the size of our entire custody division operation. So imagine what would happen if every one of these (people) were terminated."

The Board of Supervisors passed an executive order requiring all county employees, including sheriff's deputies, to register their vaccination status by Oct. 1.

The sheriff says he is vaccinated and encourages people to get vaccinated. He says deputies wear masks and are willing to submit to routine COVID-19 testing. He believes a mandate is not the way to go.

Critics say by not enforcing a mandate, Villanueva is sending out a mixed message about getting the vaccine.

Meanwhile, LAPD Chief Michel Moore said Tuesday that 1,357 department employees have not submitted their vaccination status as of Friday.

"Those are the first individuals that we will be meeting with to provide them a notice of the mandatory vaccination requirements, and providing them 48 hours in which to identify that status and enter into an agreement of twice a week testing," Moore said.