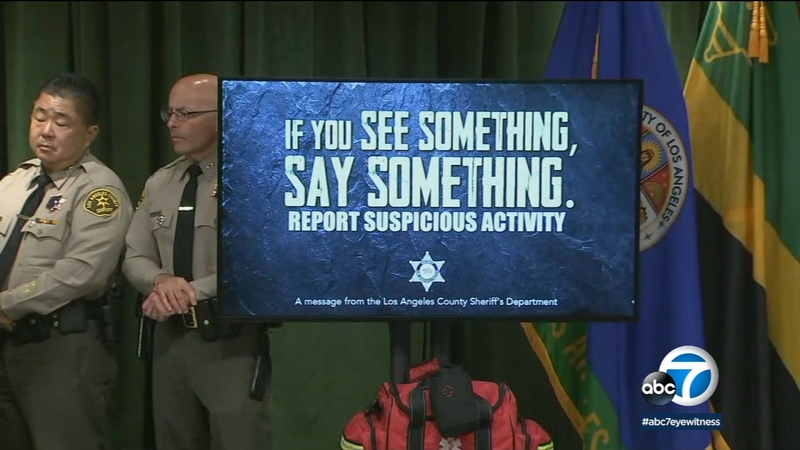 DOWNTOWN LOS ANGELES (KABC) -- After a weekend that saw two mass shootings in Ohio and Texas, the Los Angeles County Sheriff's Department wants people to know there are measures you can take to protect yourself and family.

The department held a briefing to discuss what the public can do during active shooter situations and department response systems in place.

While there are no current active threats, in the coming weeks, sheriff department personnel are charged with reviewing and discussing the recent shootings and applying any lessons learned.

"We are constantly improving and changing our protocols based on current tactics being employed by the bad guys, and we learn from every single active shooter event, such as the ones recently happened in Ohio, as well as in Texas," said Sgt. Mike Harding.

Officials say the public plays an important role in the fight against active shooters.

"For example, the shooter at El Paso, he was seen walking through a parking lot carrying a rifle and wearing hearing protection," Harding said. "That should be a red flag to anyone that should have watched it to realize that something is wrong with this picture."

Authorities say if you see something, say something, but also take ownership of your safety and protection by keeping these key words in mind: run, hide, fight.

"First thing that I would do given time and opportunity is to get away from the location, meaning run," Harding said. "If for some reason you cannot run away, and your escape routes are blocked, you need to look for a place that you can effectively shelter-in-place."

Harding says look for a door you can lock, furniture you can barricade yourself behind, and anything that will protect you from a bullet. And if you can't run or hide, prepare yourself to fight.
Report a correction or typo
Related topics:
los angeles countylos angeles county sheriff's departmentgun violencemass shooting
Copyright © 2022 KABC Television, LLC. All rights reserved.
TOP STORIES
Police investigating smash-and-grab robbery at OC jewelry store
Neighbor says he heard over 100 shots fired during 'ambushed' party
Wild Wall Street: Up-and-down day reflects market uncertainty
CA students must get COVID-19 vaccine under new proposed bill
Rams ban ticket sales to 49ers fans in Bay area
Growing the American dream in new ABC drama 'Promised Land'
Koreatown service dog is dead after being attacked by two pit bulls
Show More
Tax changes you should know about before filing this year
Cause of death revealed for 23-year-old woman found dead after date
Dad charged and fired from job after racist tirade posted on TikTok
Woman killed in 'targeted ambush' at her birthday party in Inglewood
5 tax changes that can boost your refund this year
More TOP STORIES News