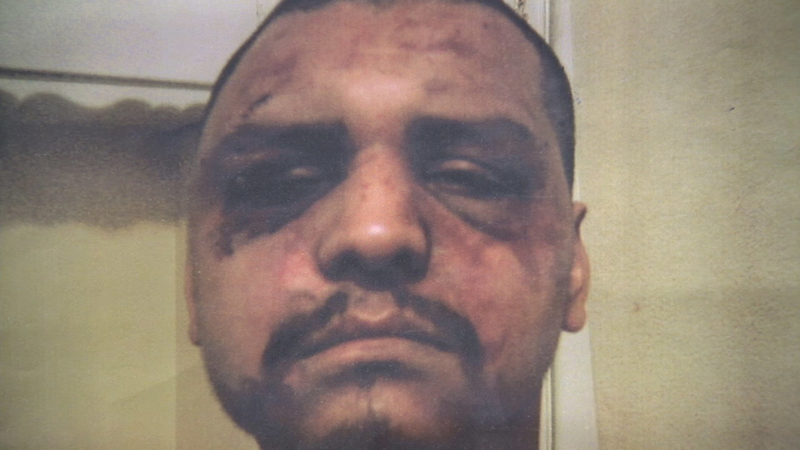 LOS ANGELES (KABC) -- Gabriel Carrillo almost went to prison for a crime he did not commit. Now, three deputies who tried to put Carrillo behind bars are facing federal prison themselves.

Former Sgt. Eric Gonzalez, Deputy Sussie Ayala and Deputy Fernando Luviano were convicted Wednesday of beating a handcuffed man and then falsifying reports to cover up their abuse.

"The whole trial was based on whether or not the suspect was handcuffed," says Tran. "According to reports and images, especially of his wrists, it just wasn't consistent."

Photographs shown at trial of Carrillo's bruised and blistered wrists had a big impact on the jury.

The images were proof, Tran says, that both of Carrillo's hands were handcuffed when deputies delivered a "beat down" on Carrillo inside the visiting center of Men's Central Jail.

"The defense didn't have much of a case," according to Tran, who added there was little disagreement among the jurors.

Carrillo went to Men's Central Jail in February 2011 to visit his brother, an inmate at the jail facility.

There's no dispute that Carrillo brought a cellphone into the jail's visiting center lobby. That's against jail policy and a misdemeanor violation of the law.

Carrillo was handcuffed and led to a deputy break room just off the visiting center lobby.

Defense attorneys argued that Carrillo violently attacked deputies after one of his hands was freed from the handcuffs - that he swung at the deputies, using the freed restraint as a weapon.

"I believe that an individual who carries a badge and a gun and who uses their authority and power to violate people's constitutional rights, as was the case here, is one of the worst types of criminals and should be brought to justice," says federal prosecutor Lizabeth Rhodes.

The defendants could face up to 40 years in prison, although federal sentencing guidelines will likely result in a term between five and six years.

"This means we have now convicted 14 sheriff's deputies of misdeeds through our investigation of obstruction of justice, deprivation of rights, bribery and other charges," says Rhodes.

The convictions are part of a wide-ranging federal investigation into abuse and corruption inside the county jails, which are run by the Los Angeles County Sheriff's Department.

Seven deputies were convicted last year of obstructing the FBI investigation by hiding inmate-turned-FBI informant Anthony Brown. All seven are appealing and remain free on bond.

Two other "use of force" cases, also brought by the U.S. Attorney's Office, will go to trial in the fall of this year and early 2016.

Los Angeles County Sheriff Jim McDonnell tells Eyewitness News the behavior that led to the convictions is, "disappointing to everybody who wears a badge across America."

McDonnell took office in December of 2014, the first outsider to be elected to the department's top job in decades.

"This job is not for everyone. And for those who can do it the way it was intended to be done, it's the best job in the world," McDonnell tells Eyewitness News.

"For those who can't do it, they're in the wrong place," says McDonnell.

Long before he took office, Sheriff McDonnell got a first-hand and detailed look at problems that plagued the department as a member of the Citizen's Commission on Jail Violence, a blue-ribbon panel that investigated allegations of excessive force inside L.A. County jails.

McDonnell says sweeping changes are underway, including new leadership within the custody division and a greater commitment to caring for inmates "in a constitutional manner."

"One of the things I noticed when I came on board six months ago is that the sheriff was not directly involved in the disciplinary process," says McDonnell, who is now personally reviewing cases that could lead to significant discipline.

Peter Eliasberg, legal director of the ACLU of Southern California, has been sounding the alarm about abuse inside the jails for years.

"If it weren't for a couple of lucky breaks, Gabriel Carrillo would probably be in state prison today, based on the lies of these sheriff's deputies. But instead, fortunately, justice prevailed," Eliasberg tells Eyewitness News.

Eliasberg is hopeful about changes within the department and believes the jails are safer now than they were in 2011 when the beating occurred.

Carrillo might be incarcerated today if it weren't for attorney Ron Kaye, who defended Carrillo against the false criminal charges of attacking the deputies.

"We feel vindicated from this verdict," says Kaye on behalf of his client, Gabriel Carrillo.

"Mr. Carrillo's life was turned upside down. Now, the tables have turned and these deputies can no longer act with impunity."

Carrillo had originally faced up to 14 years in prison for the alleged attack on deputies. The Los Angeles County District Attorney's office dropped the case shortly before trial and the county later paid Carrillo nearly $1.2 million dollars in a civil settlement.

After the guilty verdicts were announced Wednesday, federal prosecutors argued that the three convicted deputies should be taken into custody immediately.

Sentencing is set for Nov. 2.

Gonzalez left the department in May of 2013. Deputies Ayala and Luviano have been relieved of duty without pay since early January 2014.

The sheriff's department is prohibited from discussing personnel matters, but it's likely the now convicted felons Ayala and Luviano will soon be "separated" from the department.

Tran tells Eyewitness News he doesn't believe that all police officers are "bad guys." Instead, the foreman hopes the guilty verdicts will help to break down the "code of silence" that led to false charges against Carrillo.

"I think even if you stay silent, you're somewhat part of the problem as well," says Tran.