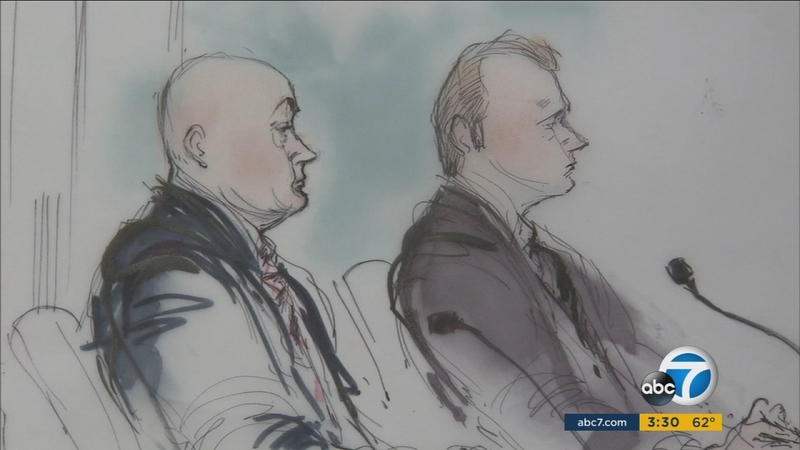 LOS ANGELES (KABC) -- Two Los Angeles County sheriff's deputies were sentenced Monday to serve time in federal prison after being convicted of beating a mentally-ill inmate and attempting to cover it up in 2010.

The two men were convicted in May of federal civil rights violations and making false statements in reports regarding the beating of inmate Philip Jones at the Twin Towers Jail. The two men were said to have pepper-sprayed and hit an inmate without provocation on March 22, 2010.

During testimony in the trial, a former sheriff's deputy trainee said the men beat Jones until he screamed and cried. Jones was sent to the infirmary and the deputies then wrote an official use-of-force report with false statements, according to the trainee.

In the testimony, he added that at the time, Brunsting, who was then a training officer, told the trainee that they were going to "teach (the inmate) a lesson."

Brunsting, Branum and the rookie deputy brought the victim out of the visiting area and directed him to a locked hallway without surveillance cameras. Once in the hallway, Jones realized he was going to be assaulted and began to run. Brunsting and Branum then tackled Jones and beat him with fists, kicked him in the genitals and sprayed him in the eyes with pepper spray.

Once other deputies arrived, they instructed the rookie deputy to handcuff the victim before he was led away for medical treatment.

A sergeant and watch commander signed off on the false report, which said Jones had fought and sworn at officers, even kicking and punching them.

After the beating, the three involved in the beating met to coordinate and falsify their stories. The rookie deputy testified that he was told what to say and how to write his report.

As prosecutors argued at trial, the reports by Brunsting and the rookie were strikingly similar and were written to justify use-of-force by claiming that Jones tried to punch the rookie.

Brunsting was also charged separately for another incident at the facility involving an assault on an inmate in 2009.

"Both defendants engaged in a vicious, premeditated assault on an inmate," said U.S. Attorney Eileen M. Decker. "Deputy Brunsting's conduct was even more egregious given that he was involved in the abuse of a second inmate, and he was training new deputies on how to violate inmates' civil rights and get away with it."