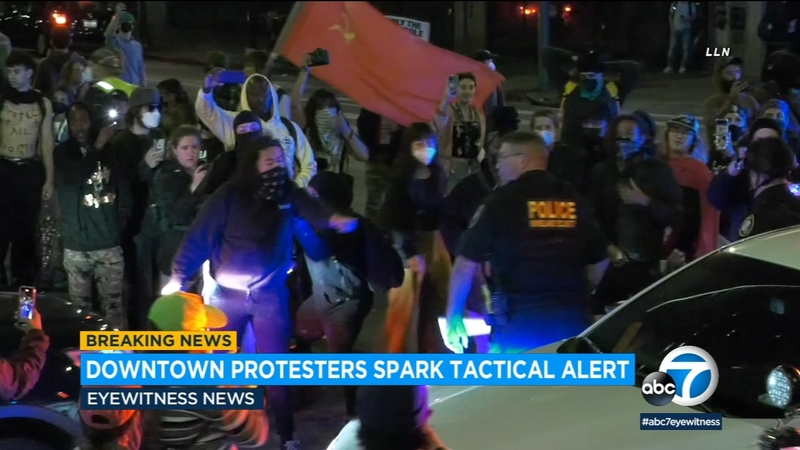 DOWNTOWN LOS ANGELES (KABC) -- A citywide tactical alert was issued by the Los Angeles Police Department after a group of protesters began taking over streets of downtown Tuesday night, injuring one officer.

The group began to gather at around 9 p.m. near Pershing Square on S Hill and W 5th streets.

#BreakingNews Handful of protesters in standoff with #lapd . Officers in riot gear moved in to clear out the crowd. One officer hurt.
Hill b/w 4th and 5th shut down.
Latest live 11pm @ABC7 pic.twitter.com/ltLOgHTS8M

Police began receiving reports of the protesters surrounding Department of Homeland Security patrol cars and allegedly trying to take over a Metro bus.

According to LAPD Chief Michel Moore, officers attempted to disperse the group, but the crowd began throwing rocks and bottles.

Receiving update on protest @ Pershing Square. A segment of the group began to take the intersection. We attempted to communicate, clear and provide dispersal order to the group. Crowd began to throw rocks and bottles at ofcrs . We have one ofcr injured( Unk extent). https://t.co/nYMbwTUsxj

One officer was injured, though the extent of his or her injuries is unknown.

AIR7 HD cameras captured more than a dozen law enforcement vehicles lined up as officers began to block the street.

The entire road was closed to drivers.

Just before 11 p.m., LAPD downgraded its tactical alert to only cover the downtown area.

Earlier on Tuesday, protests over the leaked U.S. Supreme Court draft opinion that would throw out the court's Roe v. Wade ruling sent people into the streets around the nation.

Around 1,000 people gathered in front of the court Tuesday, the vast majority calling for continued federal protection for abortion rights.