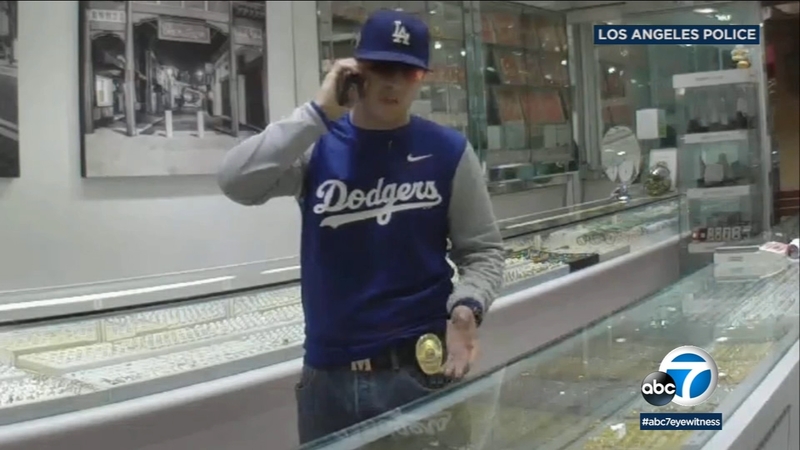 CHINATOWN, LOS ANGELES (KABC) -- Los Angeles police officers are on the hunt for a man impersonating a police officer in Chinatown.

The suspect, seen in surveillance images wearing a Dodgers jersey and ball cap, was carrying a fake badge, LAPD business card and handcuffs. LAPD Detective Kenneth Scott said the suspect attempted to obtain a $10,000 gold chain from a Chinatown jewelry store, claiming he needed to have it as evidence in a robbery case.

Suspects from the initial robbery were also captured on surveillance video earlier Tuesday. Gerald Roberts, 19, was arrested and booked for grand theft with bail set at $20,000.

The robbery suspect seen on surveillance fleeing with the $10,000 gold chain remains on the loose. He was last seen wearing a brown cap and red polo shirt.

Police fear the chain could be melted down for its value.

"Finding the jewelry would be great, but I want (the business owner) to know that we are doing everything we can to make sure they have a safe environment to conduct their business," Scott said.