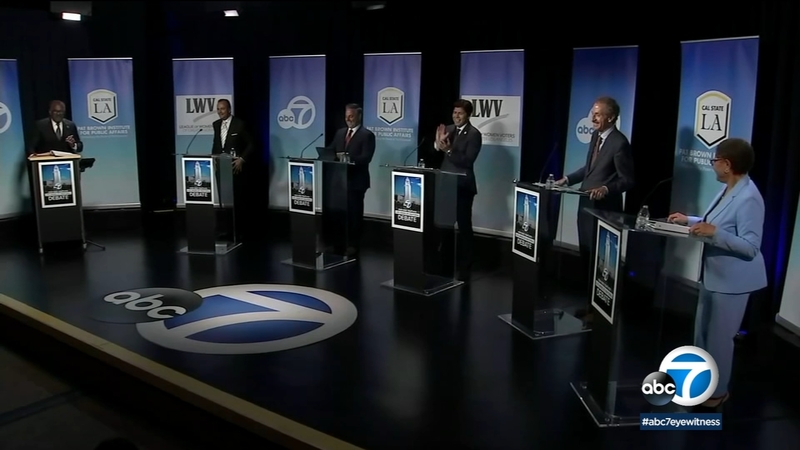 Much is at stake with just days to go before voters begin receiving their ballots.

The homeless crisis was one of the key topics.

"Move on emergency shelter beds, 10,000 units in a year. Seven shelters in each of the council districts, but at the same time, lead with balance, like I have done in my district," said mayoral candidate Joe Busciano. "With a solution, with a shelter, we will have zero camping allowed in the city of Los Angeles."

"I think there is a lot we can do but one of the problems here is the dysfunction between the city and the county. It is completely unacceptable for the city and the county not work together hand in glove," said mayoral candidate Karen Bass. "There needs to be one person in charge. One person who can say there is public property, hundreds of acres of public property, why can't we build there?"

The Pat Brown Institute for Public Affairs and League of Women Voters for greater L.A. hosted the debate at Cal State Los Angeles, and was carried live on ABC7. The debate was moderated by ABC7's Marc Brown.

"If we allow our city's outcome to be based on money, then we deserve what we get," said mayoral candidate Mike Feuer. "We can do better than that."

The debate covered everything from growing problems with public transportation to climate change to crime.

"I have a plan to add more officers, 1,500. I've tackled crime before. Bill Bratton and I got it down when I was a police commissioner by 30%," said mayoral candidate Rick Caruso. "I'll do it again, and I've got a plan to remove the encampments off the streets so people can live their lives."

"We can electrify our transportation system, that means more jobs. We can create more parks and plant more trees for canopy. That means more jobs," said mayoral candidate Kevin de Leon. "I want Los Angeles, when you see electric vehicles driving down that street, you're not hearing, wait, wait, NPR, wait, wait, don't tell me, you're hearing Los Tigres Del Norte. That's when we know that we've democratized the climate change benefit policies."

"Need to have more safety and security to get people back after the pandemic on those lines," Feuer said. "We do it by having more officers and non-uniform mental health experts on those lines."

Many watching the debate said this was the last stance for the three trailing candidates that remain. The mayoral race continues to be extremely tight between Caruso and Bass.