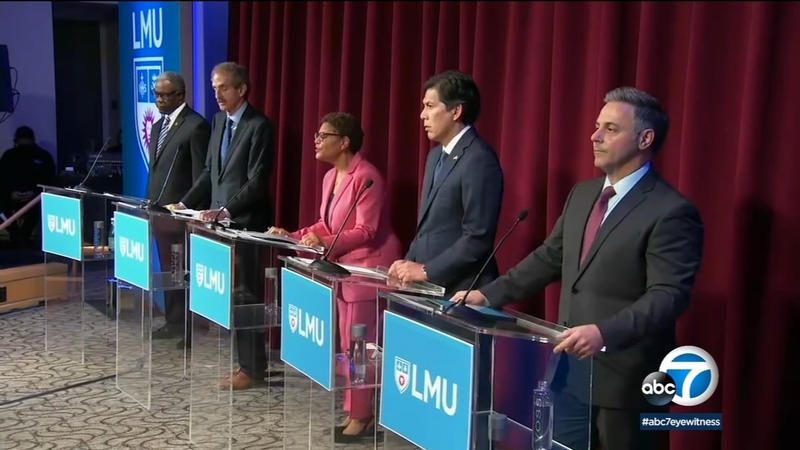 LOS ANGELES (KABC) -- The first debate for the Los Angeles mayor's race Tuesday featured five candidates who will face off in the June primary, which will narrow the field to two - regardless of their political party.

The debate at Loyola Marymount University was dominated by hecklers in the audience angry at calls by four of the five candidates, everyone except for L.A. Councilmember Kevin de León, to increase the LAPD.

Congresswoman Karen Bass, one of the frontrunners, said she would add 200 officers.

"I've been so concerned about the level of discourse here, right in Los Angeles, and I think that we are at a crossroads," Bass said. "We could go in two different directions in our city right now. We could turn toward each other and solve our problems, or we could turn against each other."

"We have to increase our police force by 1,500 patrol officers on our streets, complimented by 350 mental health and other case workers," mayoral candidate Mel Wilson said at the debate.

"I will also make sure we get our LAPD officers off the mental health frontlines and back on the line of duty," De León said.

"We have the finest police department in the country. On day one, I'm going to let the police officers know: I see you. I respect you. I was one of you. I got your back, and I support you. But the minute you tarnish the badge, I'll be the first to hold you accountable," Buscaino said.

Black Lives Matter - Los Angeles co-founder Melina Abdullah is not happy with any of the candidates stance on public safety.

"It's important that voters have choices. Unfortunately, what we heard last night was virtually every single candidate speak the same rhetoric around public safety and around wanting to increase policing in this city when Angelenos have said repeatedly that we don't want that," Abdullah said.

On homelessness, all the candidates agreed people shouldn't be allowed to sleep on our street's if offered a permanent or interim option.

"The outreach is going to focus on housing and services first, and we're going to say to people experiencing homelessness: the street is not safe for you. We have an alternative for you," Feuer said.

Rick Caruso was not at the debate because he had a scheduling conflict ,according to his campaign. But that didn't stop candidates from going after the billionaire.

"There's one candidate that's not here today that supported doing all he could to silence our working family and unions," Buscaino said at the debate about Caruso. "He supported Prop 75. Gave $220,000 to the state of California's largest anti-union initiative that would have silenced cops, firefighters, teachers, electricians."