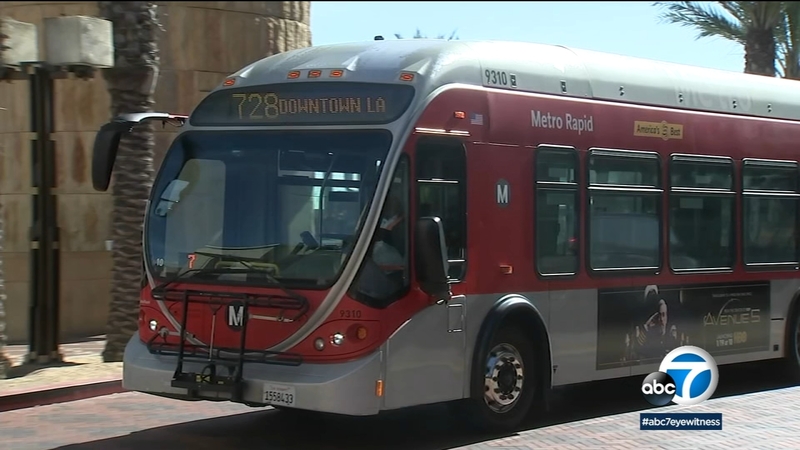 The NextGen Bus Plan is intended to increase ridership primarily by slashing wait and travel times on Metro's most-used lines.

Among the proposals, some routes would be consolidated, most buses would arrive every five to 10 minutes and the number of people who could walk to a bus line would more than double to 2.2 million people.

The plan would also combine some local and rapid lines by reducing the overall number of stops -- meaning buses would stop less frequently than existing local lines but slightly more than rapid lines. Metro officials said the move would result in faster trips for all riders.

"There's a lot of short distance trips being made and a lot of trips that are no longer Monday through Friday 9 to 5," said Stephen Tu, Metro director of Service Planning. "They are now occurring in the middle of the day and on the weekends, and so we really looking to realign our bus system to be relevant to the way people in Los Angeles travel today."

Some bus service in low-ridership areas would be shifted to other transit agencies, particularly in areas where existing Metro bus service overlaps with other providers, Metro officials said.

In areas with bus service that is perpetually under-used, Metro officials said they will explore other transit methods.

Metro officials said one of the biggest criticisms of the current bus system is that it relies too much on "legacy lines'' and that the agency has not cut routes to bulk up service where it is needed the most.

"This agency has a crisis. It's ridership is declining particularly on buses," said Los Angeles City Council Member Mike Bonin, who is also on the Los Angeles County Metropolitan Transportation Authority's Board of Directors

Twelve public workshops are scheduled to take place in February and March, followed by meetings with stakeholders this spring. Public hearings will take place in June, and the input from residents will be reviewed by Metro Service Councils in August and by the Board of Directors in September, Metro officials said. The list of public workshops can be found here.

"The voters have said to us we want this to work well, and we're prepared to pay for it, so obligation is to make it work and make it work well," Board Director Mark Ridley Thomas said.

Later this month, Metro will also release proposed route-by-route changes and online tools that will visualize what bus rides would be like under the draft plan.

The rollout of the new bus system would take place in three phases. The first wave of changes would begin in December, continue in June 2021 and be completed in December 2021.

The board also approved to move the bus system toward a "Transit First'' approach that includes capital projects to speed up buses, make bus stops more comfortable, expand all-door boarding and add more frequent service, among other improvements.

Initially, the study was planned to first focus on Los Angeles Unified School District, but board members said they want to fan out the program to include all Metro service areas.

Board member and Los Angeles City Councilman Paul Krekorian said LAUSD needs to be considered as a priority as it has a massive student enrollment.

"LAUSD has a ... school-choice program. That means some students attend school 20 miles away from their home and there may or may not be district-provided transportation that's adequate to get those kids to those schools and, if there is, it may not be the most efficient way," Krekorian said, adding that almost 700,000 students attend the district's schools.

LAUSD reports that 80% of its students live below the poverty line and some struggle to pay for transit, especially homeless families.

The board directed Metro's CEO to work with LAUSD and other school districts, cities, the state and other stakeholders to return to the board in April with a report that includes a review of the performance of existing free transit programs for K- 12 students and cost estimates of providing free Metro transit services for LAUSD and other school district's students and potential subsidies to phase the program based on Metro's Equity Platform.