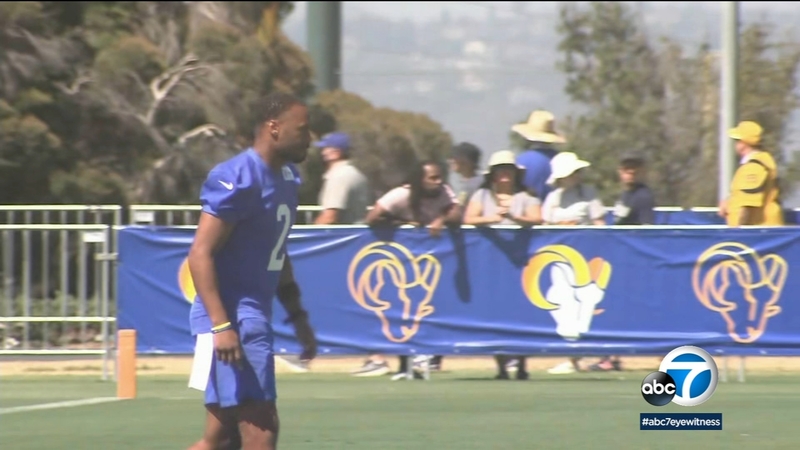 LOS ANGELES (KABC) -- The talented broadcasting team who will be calling the Rams preseason games on ABC7 has been announced.

ABC7 will broadcast all of the Rams' preseason games, starting on Aug. 14, when the Rams host the Chargers.

The preseason game, starting at 7 p.m., will air a half-hour show before each game, hosted by sports anchor Rob Fukuzaki with former Rams players Jackie Slater and Roland Williams.

"I couldn't be more excited to be joining the Rams preseason broadcast team, and work alongside Andrew and Mina," said Talib. "The Rams were one of my favorite teams that I had the opportunity to play for and I'm pumped to be back."

On radio, ESPNLA 710 AM and KWKW 1330 AM will broadcast both preseason and regular season Rams games.

The games will also be streamed for free on the Rams website.

The Los Angeles Rams invited season ticket members to SoFi Stadium to get a first-look at their seats for the upcoming season.

For the second preseason game, the Rams host the Las Vegas Raiders on Saturday, Aug. 21. On Aug. 28, the team heads to Denver to play the Broncos.

"As the most-watched station in Southern California, ABC7 is the perfect fit and proud partner of the Rams to provide the best place to watch the preseason games on television," said Cheryl Fair, president and general manager of KABC. "We are also immensely pleased that our partnership extends beyond football and throughout the year as we partner on community activations that will provide support and resources to our diverse communities across the southland."

The $5 billion SoFi Stadium opened for NFL games last year, but fans were not allowed in the seats due to the pandemic. The 70,000 seat venue in Inglewood will also host Super Bowl LVI on Feb. 13, 2022.

The Rams, who made it to the Super Bowl in the 2018-19 season, finished last season at 10-6 and were knocked out of the postseason by the Packers in the divisional playoffs.

Then they made a big move in the offseason that has fans excited for this year, acquiring quarterback Matthew Stafford from the Lions in exchange for Jared Goff and multiple draft picks.

The regular season begins Sept. 12, with the Rams hosting the Chicago Bears at SoFi.