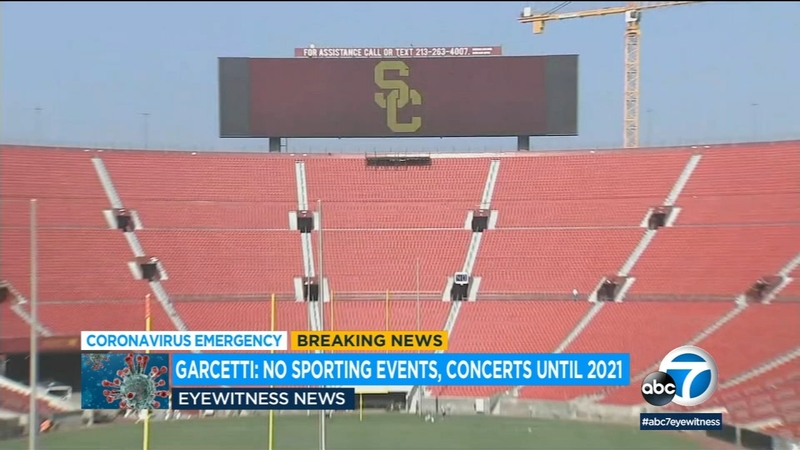 LOS ANGELES (KABC) -- Angelenos should not expect to see large gatherings, such as sporting events and concerts with fans in attendance, returning to Los Angeles until next year, Mayor Eric Garcetti said Wednesday.

"Nothing I've heard would indicate that we'll be having thousands of people gathering anytime soon and probably not for the rest of this year," Garcetti told CNN's Wolf Blitzer.

Large gatherings in Los Angeles, like much of the nation, have been shut down amid the COVID-19 pandemic. Even as the number of coronavirus cases and deaths continues to grow, there has been increasing attention on the question of when the country can reopen for business again.

Gov. Gavin Newsom said this week he also does not expect mass gatherings to return this summer, but he has not been more specific about a date. He released a plan to modify the state's coronavirus restrictions, saying that there would be no large-scale events until there is herd immunity and/or a vaccine. This could be months away or longer.

"Large-scale events that bring in hundreds, thousands, tens of thousands of strangers altogether across every conceivable difference, health and otherwise, is not in the cards based upon our current guidelines and current expectations," Newsom said.

Garcetti noted that even if the rate of growth in coronavirus cases begins to decline, ultimately there may only be 5-10% of the city that was exposed to the virus. That leaves the remaining 90% who would still be vulnerable if restrictions are lifted.

"I think we all have never wanted science to work so quickly, but until there's either a vaccine, some sort of pharmaceutical intervention or herd immunity, the science is the science," Garcetti said. "Public health officials have been very clear: We've got many miles to walk before we're going to be back in those environments,'' he added.

"But I can hope we can perhaps watch sporting events without audiences on TV ... listen to concerts as we've been doing.''

Garcetti said he discussed the matter Monday with city department general managers but no specific timeline on the resumption of large events was determined.