More than 12,000 vaccine appointments in Los Angeles delayed because of weather 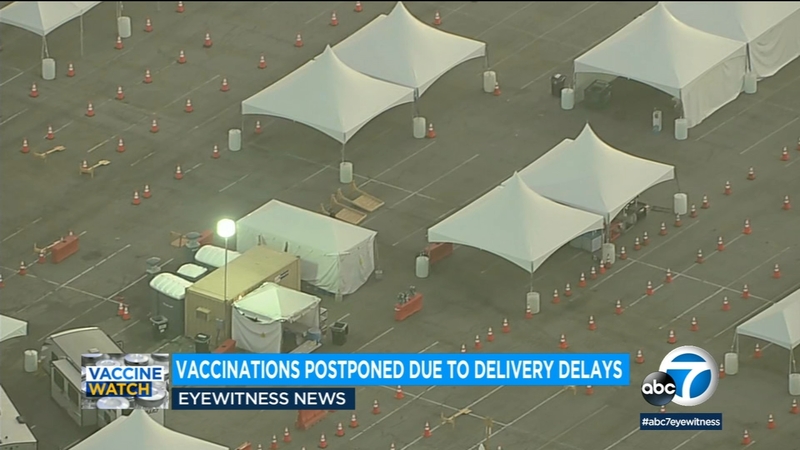 LOS ANGELES (KABC) -- More than 12,000 vaccination appointments scheduled for Friday in Los Angeles have been delayed because of winter weather across the country, Mayor Eric Garcetti said Thursday afternoon.

At least two major shipments, totaling more than 60,000 doses, have been held up in other states because of icy roads and grounded flights amid a massive winter weather storm across large portions of the country. Officials said 26,000 doses that were supposed to arrive Tuesday are in Kentucky, and 37,000 doses intended to be used for next week's appointments are in Tennessee.

"Severe weather across the country has disrupted travel and shipping nationwide, including delaying the delivery of our vaccines,'' Garcetti said Thursday while announcing the closures. "Our city is ready to administer COVID-19 vaccines swiftly, safely and equitably -- and as soon as doses arrive in Los Angeles, we will get them into people's arms immediately.''

About 12,500 people in the city of Los Angeles who had vaccinations scheduled Friday will be notified that their appointments are being postponed. They should expect to receive notifications by text, email or phone about rescheduling.

"We are in a race against time, a race between infections and injections, and anything that slows down our progress is unacceptable," Garcetti said. "This is not a reflection of how fast we can get vaccines into the arms of Angelenos. Our infrastructure here in Los Angeles, as it's been for testing and so much more, is among the most efficient in this country and in the world."

Some people were seen driving up to the Dodger Stadium vaccination site early Friday morning. It is unclear if they received notification of the delayed appointments.

The city said the delays only affect the super sites, while vaccinations for the city's mobile clinics will continue as scheduled.

It was not known yet whether Saturday appointments would also be postponed.

The latest disruption comes less than a week after the city closed its vaccination sites last Friday and Saturday after exhausting its supply of first-dose Moderna vaccines.

Prior to running out of vaccines, the city received only 16,000 new doses for the week, while it was administering an average of 13,051 doses per day.

L.A. County officials said their sites have not been affected by any weather-related issues, and will remain open as scheduled. The Los Angeles County sites are administering only second doses of the two-dose regimen for people in need of their second shot.

Other major vaccination sites around the region are also experiencing delays.

Orange County's super site at Disneyland is temporarily closing because of a lack of supply related to weather delays, the county says.

The site primarily distributes the Moderna vaccine and a shipment from the manufacturer that was expected Tuesday did not arrive. The Disneyland site is expected to stay closed through Monday.

The planned opening of a site at the Anaheim Convention Center expected next Wednesday may also be delayed.

Los Angeles County officials say they are not experiencing delays at this time with the county-run sites, which are currently mostly focused on administering second doses.

Riverside County says they have been told to expect delays in shipments of the Moderna vaccine. The county was able to keep most of the appointments as scheduled by providing the Pfizer vaccine instead.

About 600 Riverside County residents who were scheduled for their second doses of the Modern vaccine this weekend are being rescheduled for next week.

San Bernardino County says it has not had to cancel any appointments at county-operated clinics. The county-run sites use the Pfizer vaccine and expect to have enough to honor existing appointments.