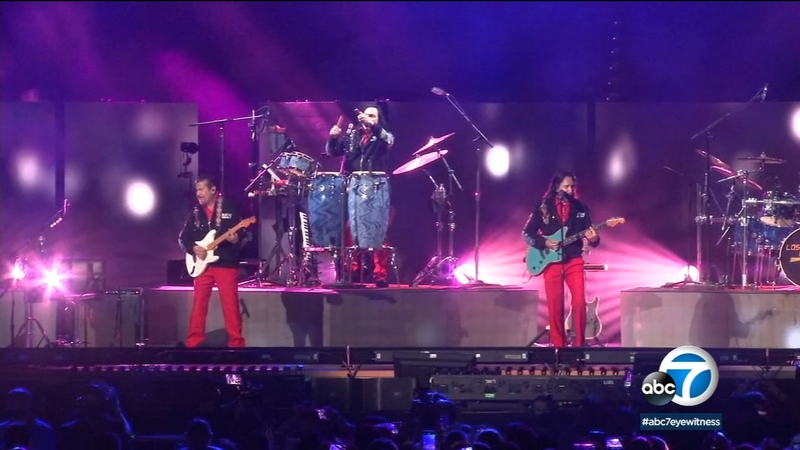 INGLEWOOD, Calif. (KABC) -- It was a packed house at SoFi Stadium Friday night as thousands of Los Bukis fans got to see the legendary Mexican band on stage for the first time in 25 years.

Earlier this summer, the superstars announced they were reuniting and on Friday they kicked off the first of back-to-back nights of performances in Inglewood.

"We've been listening to their music since we were little, we grew up with them," said concertgoer Hector Mendoza.

Many who went to the first show said they don't know if they'll get another chance to see the iconic band and they didn't want to miss it.

Tickets for the band's first show at the 70,000-seat venue sold out within minutes, prompting the addition of a second show Saturday -- which also quickly sold out.

That made the group the first Latin artists to sell out SoFi Stadium. Tickets were snatched up even faster than those for the Rolling Stones' appearance at the stadium, which is scheduled for October.

After Inglewood, Los Bukis' comeback tour is headed to Chicago, followed by several stops in Texas. The tour will return to California for its final concert date in Oakland.

After 25 years, the Mexican band Los Bukis are reuniting for a tour, beginning with a limited concert series kicking off in Inglewood at SoFi Stadium.

The band's career dates back to the 1970s, when they became a huge hit in Mexico and across Latin America.

Los Bukis' most recent performance in Los Angeles was in 1995, in front of 60,000 fans at the Memorial Coliseum.

A quarter-century later, all seven members of the band, including lead vocalist and composer Marco Antonio Solís, are back together on stage for the first time.