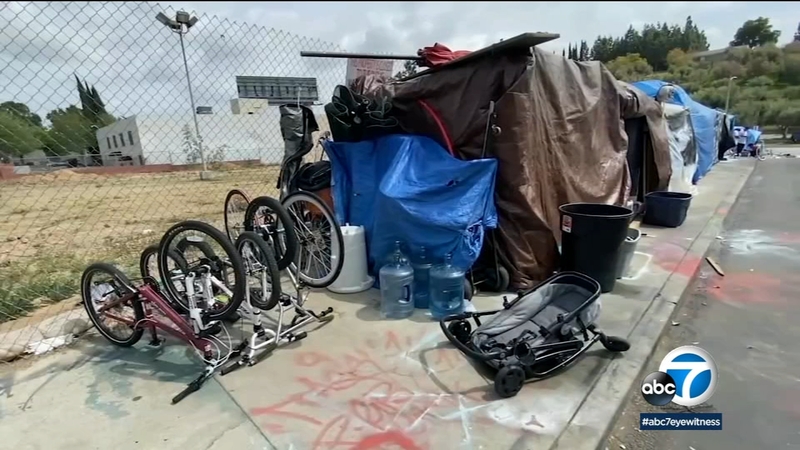 LOS FELIZ, LOS ANGELES (KABC) -- Residents of a Los Feliz neighborhood say what began as a homeless encampment more than a year ago has been transformed into a street gang-run drug distribution center.

The collection of tents and tarps sits near the intersection of Berendo Street and Hollywood Boulevard, an area that is now covered with gang graffiti.

"We saw that basically that encampment began to expand and (be) overrun by gangs," said one resident who doesn't want his name used. "And it's like a full-size apartment now dominated by gang members who are enslaving the unhoused."

None of the Los Feliz residents Eyewitness News spoke with wanted to be identified out of fear of retribution from the gang. Over the past year they've documented the drug deals, the arrests, even the gunfire, consistently reporting the problems to the Los Angeles Police Department and Councilmember Nithya Raman's office. But the encampment and gang members still persist.

"A couple of shots rang out one evening," explained a neighborhood resident. "If a stray bullet goes up the street, and hits somebody I know, or hits me or hits my wife, you know, it's just a sad story. But it is reality. It can happen."

The Los Angeles Homeless Services Authority is rehousing more people than ever, but that doesn't keep up with the number of people becoming homeless every day.

Entering the makeshift homes, though, is not as easy as it seems for law enforcement officers. They tell us current law requires officers to obtain a search warrant.

LAPD's senior lead officer on this particular case confirms to Eyewitness News that the encampment is run by a street gang, the La Mirada Locos. At the site, officers have confiscated handguns, narcotics and "wads of money."
An Eyewitness News producer approached one man at the encampment and spoke briefly with him. LAPD officers later confirmed that man was Adrian Rodriguez, a high-ranking member of the La Mirada Locos gang.

Rodriguez denies he is a member of the gang.


The encampment falls within Los Angeles's Fourth Council District, Councilmember Nithya Raman's territory. She was unavailable for an interview before our editing deadline, but her spokesman says a "cleanup" is slated for next week. The encampment won't be removed, but larger structures blocking the sidewalks will be replaced with smaller tents to keep the walkways ADA compliant.

But the people who live in the neighborhood around the encampment aren't holding out much hope that Raman will be able to rid the community of the gang and its drug sales.