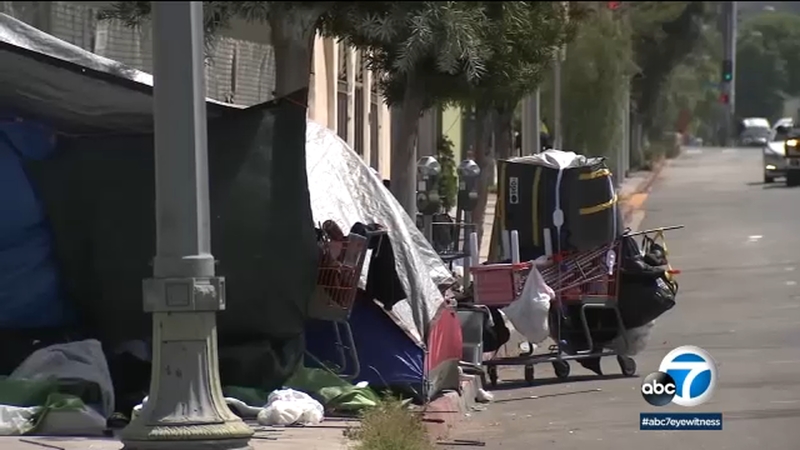 LOS FELIZ, LOS ANGELES (KABC) -- Los Feliz residents who live near a homeless encampment say the city continues to treat it like a group of unhoused people, when it's actually a street gang-run drug dealing hub.

The encampment sits at the corner of Berendo Street and Hollywood Boulevard. The Los Angeles Police Department confirms that the La Mirada Locos gang has been selling drugs from the camp.

"We have made, just in the last 30 days, arrests for guns, narcotics, narcotics felony warrants," said LAPD Senior Lead Officer Leo Rey about the gang members who have set up shop within the collection of tents.

"It's obviously a gang problem and not a homeless problem," said one resident who did not want to be identified for fear of retribution from the gang. "I don't feel comfortable going to work knowing that they're across the street and my property has been broken into four times now."

Residents say Westchester Park is already filled with dozens of tents with trash strewn everywhere. Many are citing safety concerns as they oppose a plan to use the park to house the homeless.

But city officials continue to treat the encampment as a group of homeless people. Officer Rey says the city actually replaced a makeshift tarp structure set up by one of the gang members with a brand new tent to allow enough room on the sidewalk for American Disability Act compliance. Rey says the city also set up a portable restroom that is cleaned by city crews every morning.

Rey says one gang member, who has been holed up here since late last summer, sells drugs during the day and sleeps at a nearby motel at night.
"As a police officer, I've never encountered anything like this in my 25-year history," Rey told Eyewitness News.

The encampment sits within Los Angeles City Council District 4 represented by Councilmember Nithya Raman. Raman says the homeless encampment at Berendo and Hollywood has been around for years, well before she took office last year.

Raman acknowledges that a criminal element exists within this encampment and says her office has to let LAPD handle that aspect.

As for the true homeless individuals, Raman says the city can't just remove them without a place to house them.

"To be able to transition people into interim and long term housing solutions that are really going to be effective at keeping people out of homelessness on a long term basis, we just don't have those resources available to us and I'm literally clawing them from the system," said Raman.

As for the criminal element at the encampment, Officer Rey says because of the pandemic, people charged with non-violent crimes are released the same day. And, he says, police can't just barge into a tent or tarp and start seizing drugs.

"We need a search warrant to enter one of these locations," Rey said. "It's just like a home, its a structure."