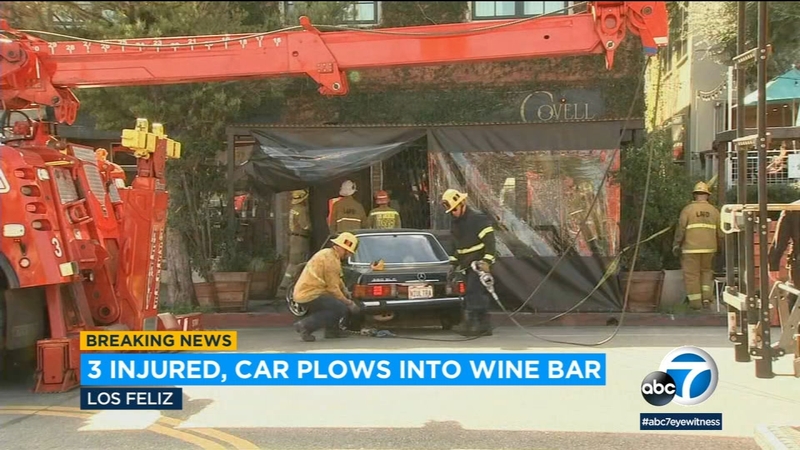 The crash was reported around 12:20 p.m. in the 4600 block of Hollywood Boulevard, according to the Los Angeles Fire Department.

The vehicle went about 5 to 10 feet into the Covell restaurant, striking and injuring two pedestrians who were walking by. Witnesses said it appeared the driver was trying to make a left turn onto Hollywood Boulevard and was driving fast prior to crashing.

The two 27-year-old pedestrians, a man and a woman, were transported to a medical center with severe injuries but they are in stable condition, LAPD Detective Juan Campos said. Witnesses said one of the victims flew into the air.

The 82-year-old driver was also in stable condition.

"All remaining occupants of the two-story building that contains apartments above the restaurant, as well as downstairs retail store, have been temporarily moved outdoors until the damaged structure can be formally assessed for structural integrity by an L.A. Department of Building & Safety Inspector," the Fire Department said.

News video from AIR7 HD appeared to show the vehicle under a canopy outside the Hotel Covell, a boutique establishment located in the same building as HomeState, a popular Tex-Mex restaurant.

The bar was closed at the time, and no employees were injured.

A stretch of Hollywood Boulevard was closed as crews worked to removed the vehicle from the sidewalk in front of the building.